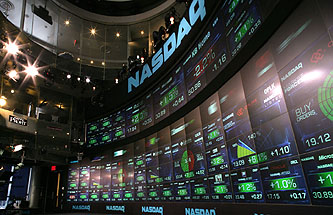 Is high-frequency trading a net negative or a net positive? Obviously, if HFTs make money, they’re making it from other investors. That’s a negative. On the other hand, they provide market liquidity, which is a positive. So how do things net out?

John Carney suggests a natural experiment that tells us. Back in August of 2007, quant hedge funds took a bath when markets started moving in weird ways. But that was only at the micro level, where quants make their bets. Overall, the S&P 500 went up and down pretty normally during the week the quants were losing their shirts:

Tellingly, the S&P rose on the days that were supposedly the worst for the quants. The reason why that is significant is that we’ve since learned that one of the things that made the situation so bad for the quants was a sudden loss of market liquidity.

And what caused the loss of liquidity? Well, it appears that one big factor was the flight of high-frequency traders from the market. The algos of the quants just didn’t work well when the HFTs refused to provide liquidity.

The point here, however, is not about the quants versus the HFTs. It’s about what a rising market in the absence of HFTs may indicate. If high-frequency traders are a net benefit to investors, their exit should cause valuations of stocks to fall. If stocks rise while they exit, this at least suggests they may be a net cost.

Carney takes this as tentative evidence that HFTs are a net negative. But I’d add two other points. First: the problem with HFTs is that they produce liquidity precisely when nobody needs it (i.e., normal times) and withdraw it precisely when everyone does need it (panicky times). But this isn’t liquidity at all. Almost by definition, a market is only truly liquid if you can buy and sell even when times are tough. After all, even crappy markets have pretty good liquidity during good times. The faux liquidity that HFTs provides is the worst kind of liquidity in the world: you’re better off having limited liquidity all the time than having it suddenly cut off just at the time when it’s most important.

Second: nobody really understands how HFTs work. Even the HFT gurus don’t really understand it. That’s why the quants got blindsided, and that’s what makes HFTs so dangerous. They’re almost certainly introducing a lot of extra tail risk, and they’re doing it primarily by spamming the financial system.

Put all this together, and allowing HFTs to continue their merry little algobot wars is just monumentally stupid. A tiny financial transaction tax would put an end to it, and would probably improve the operation of the rest of the financial industry too, all while raising a bit of much-needed money. Fiscal cliffsters, take note.