Matt Yglesias, after reviewing the evidence about the effect that immigration has on wages—very little, probably—says correctly that “we’re stuck in a mostly phony argument about wages that does nothing to ease people’s real fears about nationalism and identity.” Paul Waldman goes a step further and isolates the real problem: language. “Make them learn English” may be 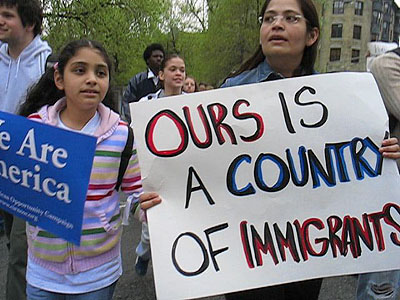 entirely unnecessary, since Mexican immigrants appear to follow exactly the same language path as every other immigrant group, but in political terms “it could be the key to passing immigration reform”:

As a group, Americans have contradictory feelings about immigration….Most Americans acknowledge that we’re all descended from immigrants of one kind or another….They also appreciate that immigration gives our country vitality, and that immigrants are exactly the kind of hard-working, ambitious strivers that drive our economy and culture forward. But at the same time, many feel threatened when they see the character of their towns and cities change, and nothing embodies that change more than language. When people walk into a store and hear a language being spoken that they don’t understand, they suddenly feel like foreigners in their own neighborhood, alienated and insecure. I’m not putting a value judgment on that feeling, but it’s undeniable.

So imagine an individual citizen/voter who has those two contradictory feelings. He sincerely wants his country to welcome immigrants, and he thinks that cultural diversity is basically a good thing, but he got a little freaked out last week when he went down to the drug store and felt like he just got transported to Mexico City. He doesn’t like feeling alienated, but he also doesn’t like that tiny voice inside him that says “Send them back where they came from!” He knows that voice isn’t right, but when he sees signs in other languages or hears other languages spoken, that voice gets a little stronger.

What the “make them learn English” provision says to him is: Don’t worry, it’s going to be OK. We’re going to make sure that this wave of immigrants is woven into the American tapestry just like the prior waves of Irish and Italian and Chinese immigrants. They won’t take America over. They’ll become American.

This is exactly right, and I think we’re less than honest if we don’t acknowledge that plenty of us lefties feel a bit of this sometimes too. It’s human nature. And that gives me an excuse (again!) to link to my second-favorite Chris Hayes piece ever. It’s about John Tanton, the founder of FAIR, the nation’s oldest and most influential immigration restriction group. For years, Tanton tried to preach an anti-immigration message based on economic and conservation grounds. But it didn’t work. Chris tells us what did work:

Crisscrossing the country, Tanton found little interest in his conservation-based arguments for reduced immigration, but kept hearing the same complaint. “‘I tell you what pisses me off,’” Tanton recalls people saying. “‘It’s going into a ballot box and finding a ballot in a language I can’t read.’ So it became clear that the language question had a lot more emotional power than the immigration question.”

Tanton tried to persuade FAIR to harness this “emotional power,” but the board declined. So in 1983, Tanton sent out a fundraising letter on behalf of a new group he created called U.S. English. Typically, Tanton says, direct mail garners a contribution from around 1 percent of recipients. “The very first mailing we ever did for U.S. English got almost a 10 percent return,” he says. “That’s unheard of.” John Tanton had discovered the power of the culture war.

The success of U.S. English taught Tanton a crucial lesson. If the immigration restriction movement was to succeed, it would have to be rooted in an emotional appeal to those who felt that their country, their language, their very identity was under assault. “Feelings,” Tanton says in a tone reminiscent of Spock sharing some hard-won insight on human behavior, “trump facts.”

Cultural insecurity and language angst are the key issues here. It doesn’t matter if they’re rational or not. Anything we can do to relieve those anxieties helps the cause of comprehensive immigration reform.