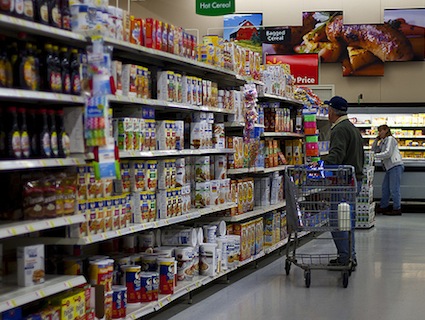 Riffing on his new book Salt Sugar Fat: How the Food Giants Hooked Us, ace New York Times investigative reporter Michael Moss is suddenly everywhere—he’s out with a blockbuster article in the Times Magazine and just appeared on Fresh Air.

I haven’t had a chance to read the book yet, but I’ve skimmed it, and it looks excellent. Here are nine quick takeaways:

1. The Cheeto is a modern miracle. Made of corn, fat, and something called “cheese seasoning” (which itself is made of 11 ingredients, including canola oil and artificial color “yellow 6”), this ever-popular snack, which now comes in no fewer than 17 different flavors, may be the food industry’s creation par excellence. Here’s Moss:

“This,” Witherly [a food scientist] said, “is one of the most marvelously constructed foods on the planet, in terms of pure pleasure.” He ticked off a dozen attributes of the Cheetos that make the brain say more. But the one he focused on most was the puff’s uncanny ability to melt in the mouth. “It’s called vanishing caloric density,” Witherly said. “If something melts down quickly, your brain thinks that there’s no calories in it…you can just keep eating it forever.”

2. Subverting “sensory-specific satiety” is the key to junk-food success. Moss identifies this key food industry concept as “the tendency for big, distinct flavors to overwhelm the brain, which responds by depressing your desire to have more.” The key is to create recipes that get around it. Moss explains:

Sensory-specific satiety also became a guiding principle for the processed-food industry. The biggest hits—be they Coca-Cola or Doritos —owe their success to complex formulas that pique the taste buds enough to be alluring but don’t have a distinct, overriding single flavor that tells the brain to stop eating.

3. At least since 1999, the industry has known its products are contributing to a massive public-health crisis. Moss’ piece opens with a secret meeting that year of the industry’s top executives wherein evidence of severe harm from the industry’s aggressive marketing of junk food—and a comparison to the tobacco industry—was laid out by concerned midlevel execs. The CEOs explicitly decided to ignore the evidence and reject a plea for reform, Moss reports. Instead, they focused their companies on more of the same.

4. Like the agrichemical industry, the food industry has become adept at selling questionable solutions to the problems it has generated. Take the industry’s habit of blasting everything with loads of salt. Apparently, baby boomers—a major target of the industry’s snack marketing efforts—are expressing interest in cutting back on salt. Problem? No, opportunity! Here’s Moss, reporting on a recent presentation by Frito Lay (a subsidiary of Pepsi) execs to investors:

The Frito-Lay executives also spoke of the company’s ongoing pursuit of a “designer sodium,” which they hoped, in the near future, would take their sodium loads down by 40 percent. No need to worry about lost sales there, the company’s C.E.O., Al Carey, assured their investors. The boomers would see less salt as the green light to snack like never before.

5. First you find a product that sells, then you find the right cheap ingredients to make it profitable. The rise of Lunchables, the massively profitable school lunch product Philip Morris launched in the 1980s, illustrates a key insight into how the food system works. Here it is, emphasis added:

The trays flew off the grocery-store shelves. Sales hit a phenomenal $218 million in the first 12 months, more than anyone was prepared for. This only brought Drane [the Philip Morris exec who invented Lunchables in the 1980s] his next crisis. The production costs were so high that they were losing money with each tray they produced. So Drane flew to New York, where he met with Philip Morris officials who promised to give him the money he needed to keep it going. “The hard thing is to figure out something that will sell,” he was told. “You’ll figure out how to get the cost right.” Projected to lose $6 million in 1991, the trays instead broke even; the next year, they earned $8 million.

Those cheap ingredients are, of course, mainly iterations of corn and soy—the two crops that cover more than half, and growing, of US farmland, propped up by US farm policy. That’s where the interests of Big Food and Big Ag intersect. And a topic for another post.

6. Your brain reacts to sugar and cocaine in very similar ways. You know how people will sometimes call food they like a lot “crack”? E.g,. “Hey, this roasted broccoli is really good—it’s veggie crack!” Turns out, in the case of sugary foods, it’s more than just a metaphor. Moss:

Some of the largest companies are now using brain scans to study how we react neurologically to certain foods, especially to sugar. They’ve discovered the brain lights up for sugar the same way it does for cocaine, and this knowledge is useful, not only for formulating foods. The world’s largest ice cream maker, Unilever, for instance, parlayed its brain research into a brilliant marketing campaign that sells the eating of ice cream as “scientifically proven” way to make ourselves happy.

7. “Food manufacturers now spend nearly twice as much money on advertising their [breakfast] cereals as they do on the ingredients that go into them.” This fact may be well known to others, but it dropped my jaw.

8. Tang wasn’t developed for astronauts. I grew up thinking the treacly orange stuff somehow grew out of the US space program (which added to its appeal). Moss set me straight. Turns out, it grew out of the efforts of a giant company called General Foods to think outside the cereal box in marketing breakfast foods to kids through their mothers in the 1950s. The idea was to create a “synthetic juice” to eliminate the drudgery of making orange juice from concentrate or—gasp—squeezing it from fresh oranges. Early efforts were promising but unsuccessful—they had a “good mouthfeel,” but tasted “horribly bitter and metallic.” A company engineer got to the root of the problem—the technicians had been adding a range of vitamins and minerals in an attempt to replicate the nutritional composition of orange juice. By eliminating all of the nutrient additives besides vitamin C—which imparts a tart flavor that jibes with orange juice—the company came up with a winner, launched in 1958.

And there actually is an after-the-fact space angle—and it’s scatological:

NASA, the space program, needed a drink that would add little bulk to the digestion, given the toilet constraints of space. Real orange juice has too much bulky fiber in its pulp. Tang, however, was perfect—what technologists call a “low-residue” food.

NASA embraced Tang for its orbit around Earth in 1962, giving the instant drink a lingering marketing boost—removing untold nutrients and fiber from the US diet.

9. Many of the cereals of my childhood were composed of 50 percent sugar or more. I also loved sugary cereals as a kid. Damn, was I eating a lot of sugar back then. Moss, reporting on a cereal test conducted in 1975:

A third of the brands had sugar levels between 10 and 25 percent. Another third ranged to an alarming 50 percent, and 11 climbed higher still—with one cereal, Super Orange Crisps, packing a sugar load of 70.8 percent.