Felix Salmon is enthusiastic about the latest version of the Startup Act, sponsored by a bipartisan group of senators. In particular, he likes the idea of creating an “immigrant-entrepreneur visa”:

The immigrant-entrepreneur visa is pretty simple. You create a pool of 75,000 such things, available to anybody who’s here already on an H1-B or F-1 visa. When those people switch from their old visa to their new one, they have to start a new company; employ at least two full-time, non-family member employees “at a rate comparable to the median income of employees in the region”, and invest or raise at least $100,000. After that, they have to continue adding employees at a rate of one per year, so that after three years, there must be at least five employees. At the end of three years, you graduate to a green card, and with it the standard path to citizenship.

The new visa would create an employer exit strategy for H1-Bs, allowing workers to leave companies which pay too little or offer too few opportunities, and instead strike out on their 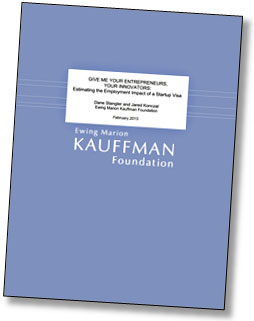 own. And of course — by definition — it would create jobs.

Hold on a second. This is based on a Kauffman Foundation report, and as near as I can tell, the authors didn’t even make a nod to dynamic effects. Would this create new jobs on net? Or would job creation simply shift from one group to another? They don’t say.

In a way, of course, I don’t care. This whole thing sounds like almost a parody of bureaucracy to me, practically designed to encourage cheating and game playing among these budding new entrepreneurs. It would be much better to simply let them do whatever they want without any special rules. If they want to employ their nephews and nieces, let them. If they only have four employees after three years, but still believe in their businesses and want to keep trying to make a go of it, that’s fine with me. If they can only raise $50,000, who cares? If their company fails, let ’em start up a new one or take a different job.

Now, my guess is that Felix agrees. To the best of my knowledge, we don’t really have a shortage of STEM workers, so that’s a lousy excuse for a visa program. The reason we should let people like this into the country is because they’re smart and educated, and we should let them switch jobs freely. Or start up a company. Or whatever they want to do. On average, I don’t doubt for a second that this would be enormously beneficial without a bunch of dumb rules that try to shoehorn all these visa holders into specific careers.

Unfortunately, there are too many interest groups opposed to this. So instead we end up with rule-laden proposals like this. It’s a shame.