Ezra Klein makes a point today that’s worth making over and over again: it’s the demographics, stupid.

Today, there are 45 million Americans age 65 or over. By 2035, the Census Bureau estimates this will rise to 77 million. This means that even if healthcare costs were reined in completely, we’d still expect Medicare expenditures to rise by about 70 percent over that period. So why don’t we hear more about this? Ezra gets it right:

There’s a reason that policymakers prefer to talk about health-care costs than old people. If the problem is just rising costs, then perhaps there’s some cost control “silver buller” — maybe premium support, or paying for quality rather than service — that will cut costs without hurting anyone. But if the problem is more people, then the answer, really, is higher taxes, lower benefits, more debt or some combination of the three.

Our population is aging, and there’s nothing to be done about that. As it ages, it’s going to need the same level of healthcare we provide for today’s seniors. Unless you’re a sociopath, there’s nothing to be done about that either. As a result, Medicare spending is going to rise. This isn’t because government is spiraling out of control or because liberals just can’t say no to new spending. It’s because we’re getting older, and one way or another, we have to pay the bill for that.

None of this is to say that rising healthcare costs aren’t a problem. They are, and despite some recent good news suggesting that medical inflation is slowing down, this is a problem that we need to keep attacking. As the chart below shows, medical inflation (aka, “excess cost growth) is still likely to play a role in the growth of Medicare spending over the next few decades.

Nonetheless, the primary reason that Medicare (and Social Security) expenditures are rising over the next 30 years is simply because we’re going to have more old people. There are no magic bullets, either from Paul Ryan or anyone else, that will change this. This means that, like it or not, higher taxes are in our future. A couple of decades from now, we’re going to be spending something like 23-24 percent of GDP on the federal government, not the historical average of about 19 percent. No amount of screeching will change that.

Why? Because we’re getting older. It’s the demographics, stupid. 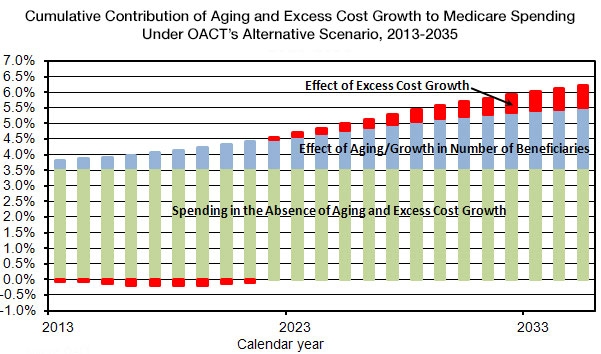