Lawmakers in both parties say the president’s efforts may make him a few new friends, but he is not going to change ideologies. Others privately complained that convening such a high-profile meeting seemed like an effort to distract from his failure to help forge a solution to avert the automatic budget cuts that went into effect last week.

Asked Thursday morning about the president’s new social schedule, Speaker John A. Boehner chuckled before saying he hoped the talks would produce real compromise….“I think it’s a sign, a hopeful sign. And I’m hopeful that 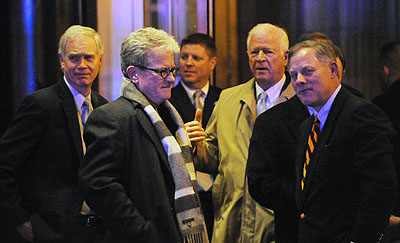 something will come out of it. But if the president continues to insist on tax hikes, I don’t think we can get very far.”

Those who have studied the relationship between presidents and Congress doubt seriously whether Mr. Obama’s latest outreach will yield much. “It’s a rather shallow notion,” said George Edwards, a political scientist at Texas A & M University and an expert who has written extensively on presidential power. “You’re not going to get committed conservatives to change their long-held ideological commitments because you play a round of golf or invite them to the White House.”

Roger that. And how did Phase 2 go on the other side of Capitol Hill today?

On Thursday, Obama’s charm offensive set the table for one of the hardest nuts to crack — the top Republican budget expert, Rep. Paul D. Ryan of Wisconsin, who as the GOP vice presidential candidate tried to evict Obama from the executive mansion where he was invited to lunch.

Ryan, chairman of the House Budget Committee, and his Democratic counterpart, Rep. Chris Van Hollen of Maryland, sat down with Obama for lentil soup and sea bass in a meeting that Ryan described as a “frank” and the White House called “constructive.”

We all know what “frank and constructive” means, right? Usually it means that no fistfights broke out, but only barely.

We’ve been through a dotcom bubble, and then a housing bubble. Right now, I feel like we’re in a presidential schmoozing bubble. I don’t think there’s much question that Obama could stand to improve his social skills, just as there’s no question that he might do himself some good by making sure his positions—and his concessions—are better understood in the halls of Congress. But the boomlet of excitement we’re seeing over a few dinners and lunch meetings with the opposition is hard to fathom. Maybe we’re all so desperate for something—anything—to convince us that our political system isn’t completely broken that we’re willing to latch on to even a routine bit of socializing as a lifeline of hope. Unfortunately, I suspect this says more about how miserable we all feel than it does about the possibility of Republicans ever agreeing to higher taxes.