The 2001 authorization of force made official a war between the United States and terrorist organizations/state sponsors who could be tied to the 9/11 attacks. Yaser Esam Hamdi was an American citizen caught on the battlefield of Afghanistan, by the Northern Alliance. How do you stretch that case far enough to cover Tsarnaev?

GRAHAM: I don’t want to hold him for more than 30 days, but within 30 days he can petition a judge and say, hey, I’m not an enemy combatant….To hold him as an enemy combatant they’d have to prove by a preponderance of the evidence that you’re tied to al-Qaeda, the Taliban, or affiliated groups. Chechnyan 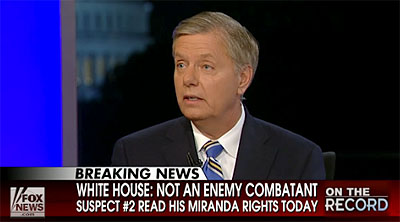 Islamic groups are affiliated with al-Qaeda under our laws.

VAN SUSTEREN: So is it enough that he visited Chechnya for six months for you to conclude that there’s a threshold met that he’s part of a group?

GRAHAM: I think so. If I were president of the United States who makes this decision, I would say, this is clearly a mass terrorist attack. [Runs down evidence against the older Tsarnaev brother] ….All that would allow me as president to say that I want to find out more in the national security legal system, not the criminal justice legal system.

In a statement a few days ago, Graham and a few other senators made the same point he made last night: “any future trial” would be held in a civilian court, but Tsarnaev should be questioned by intelligence analysts in the meantime: “The questioning of an enemy combatant for national security purposes has no limit on time or scope. In a case like this it could take weeks to prepare the questions that are needed to be asked and months before intelligence gathering is completed.”

The emphasis here is a little different than it was on Van Susteren’s show, where she repeatedly mentioned the 30-day limit on questioning. So would Tsarnaev be held for 30 days or would he be held indefinitely? Technically the former, but Graham sure seems to think that indefinitely is a lot more likely, and he’s OK with that.

It’s all moot now, since President Obama has made the decision to keep Tsarnaev in the criminal justice system. As for Graham, he might not want to try Tsarnaev in front of a military commission, but I get the pretty strong impression that he’d be just fine with tossing Tsarnaev in a brig somewhere and keeping him there forever without any trial at all. Adam Serwer has more here.