Here’s a story you’ve probably heard before: General Plastics Manufacturing of Tacoma, Washington, needs factory workers to make foam products. So they give all their applicants a math test that asks them to convert inches to feet, calculate the density of a block of foam, and a few other things:

But what troubles General Plastics executive Eric Hahn is that although the company considers only prospective workers who have a high school education, only one in 10 who take the test pass. And that’s not just bad luck at a single factory or in a single industry.

Hahn, vice president of organizational development, said that the poor scores on his company’s math test have been evident for the past six years. He also sits on an aerospace workforce training 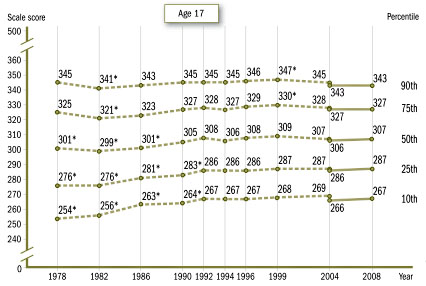 committee and said that most other Washington state suppliers in his industry have been seeing the same problem.

OK, now look at the chart on the right. It shows results from the NAEP math test—a national assessment that’s generally considered highly reliable—for 17-year-olds. And basically, it shows nothing. If you take a look at the 25th and 50th percentiles, which is where most factory workers come from, scores have been pretty flat for the past two decades. If anything, they’re up slightly.

So how do we square this with Eric Hahn’s contention that General Plastics has had trouble over the past few years finding qualified workers? I can think of a few possibilities:

There’s evidence that #3 isn’t the answer. To the extent that kids are taught to the test, they’re taught to state tests, since those are the ones used to measure performance. The NAEP is a federal test that nobody teaches to because (a) it doesn’t count for anything, and (b) it’s given to only a tiny fraction of students nationwide (less than 1 percent of all K-12 students). What’s more, the long-term NAEP, which is what I showed above, has been carefully constructed to stay the same from year to year. It’s testing exactly the same thing today that it tested in 1978.

There’s also evidence that #4 isn’t the answer. We don’t have national results for 17-year olds that are more recent than 2008, but we do have results for 8th graders on the main NAEP. Their math scores rose between 2007 and 2011. A sudden and unprecedented collapse between 8th and 12th grades seems unlikely.

There’s also evidence that #5 isn’t the answer. In fact, Washington has done a bit better than the national average over the past decade.

I might have missed a possibility. For now, though, my money is on #2.