Andrew Stiles reports that Paul Ryan is willing to “take a look” at President Obama’s proposal to adopt chained CPI as a way of reducing the growth of Social Security benefits:

Ryan, however, is not endorsing the proposal, noting that House Republicans have favored an approach that would fundamentally reform entitlement programs without affecting current seniors, unlike Obama’s plan. “It’s statistical reform,” he told reporters at National Review’s office in Washington, D.C. “You can’t claim it’s great entitlement reform.”

I’ve got a few comments on this. First, this is pretty rich coming from a guy who recently released a 91-page budget plan with the following as the sum total of his proposal to reform Social Security:

In a shared call for leadership, this budget calls for action on Social Security by requiring both the President and Congress to put forward specific ideas and legislation to ensure the sustainable solvency of this critical program. Both parties 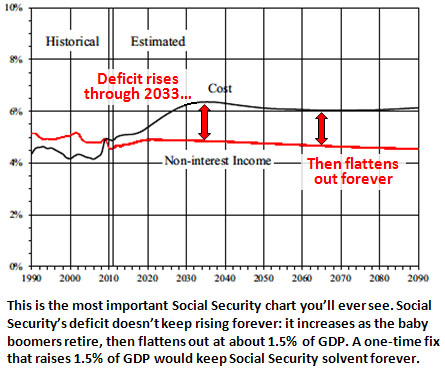 must work together to chart a path forward on common-sense reforms, and this budget provides the nation’s leaders with the tools to get there.

What a bold truth teller! Ryan himself is unwilling to put his name squarely behind a plan, but nonetheless sniffs at Obama’s proposal as mere “statistical reform.” I’m not sure how to read this as anything other than a complaint that, sure, Obama is cutting benefits, but he’s not being gleeful enough about it.

Second, it’s pretty clear that Ryan wants Obama to own this proposal. He isn’t willing to endorse it himself because he wants to make sure that seniors blame Obama for trying to cut their benefits, not Republicans.

And third, there’s the perennial pandering about reforming entitlements “without affecting current seniors.” I find this loathsome. If you truly believe that Social Security is too expensive and needs to be reined in, why shouldn’t everyone pitch in? Why exempt the very group—baby boomers—that’s responsible for the increased cost of the program in the first place?

The fact that chained CPI affects everyone is a feature, not a bug. If you truly believe that sacrifices need to be made, then everyone should share in the sacrifice. And if you’re gung ho on cutting benefits, you should be willing to suck it up and bravely tell current seniors that they’re going to have to help out too. Ryan has always been wholly unwilling to do that.