The richer you are, the more the home mortgage deduction helps you. Partly this is because you can only take the mortgage interest deduction if you forego the $12,000 standard deduction (for a married couple filing jointly), and that’s a much bigger deal for working class families than wealthier familes. It’s also because as your income goes up, you’re likely to have both a bigger mortgage and a higher tax rate. For example:

The chart on the right, courtesy of CBPP, shows the results. Two-thirds of American families have incomes under $75,000, and their total benefit from the mortgage interest 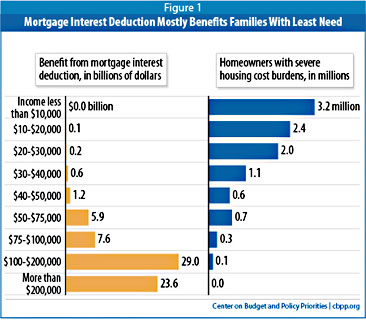 deduction is $8 billion. The one-third of families above that receive a benefit of $60 billion.

In other words, families with incomes over $75,000 receive 88 percent of the benefits from the home mortgage deduction. What’s worse, the mortgage interest deduction, as currently structured, doesn’t even appear to increase homeownership rates, its supposed reason for existence in the first place.

So what to do? Various reform commissions have recommended replacing the mortgage interest deduction with a tax credit instead. Instead of taking a deduction from your gross income, you’d simply subtract a flat percentage of your interest payments from your tax bill (up to a certain cap). You’d get it regardless of whether you took the standard deduction, and everyone would get the same percentage.

Depending on how this was set up, it would not only provide more help for average families, but it would also increase tax revenue and help reduce the deficit down the road. For example, the Tax Policy Center estimates that a 15 percent non-refundable credit would raise $197 billion over ten years if it were phased in gradually over the first five years.

CBPP also likes the idea of simply giving the tax credit to the lender, instead of the borrower, who would then pass it through to the homeowner in the form of a lower interest rate. That would indeed be easier on everyone. And although CBPP doesn’t say this, I suspect part of its appeal is that a credit to the lender might be politically easier to phase out completely in the future.

If you want to learn more, the CBPP report has much more detail.

UPDATE: A reader emails to add another tidbit to think about:

One key factor you don’t mention is that it’s largely a regional thing — the vast majority of the deductions go to homeowners in New York City, Los Angeles and the Bay Area. In those three places, the deduction is actually a pretty big deal because houses are so expensive….That’s part of the reason it’s such a political challenge — our political elite largely lives in expensive cities where a lot of people actually do get the deduction.