Yesterday I wrote a post about a study showing that even when unemployment was high, native-born Americans weren’t willing to take jobs picking crops. “Most Americans just aren’t willing to do backbreaking agricultural labor for a bit above minimum wage,” I said, “and if the wage rate were much higher the farms would no longer be competitive.”

I got some pushback on this this. First, from reader BE:

Competitive against whom? If immigrant labor weren’t available and Americans weren’t willing to work that hard for that wage, the competitive landscape would change. Some crops might become less competitive relative to other crops and food prices might rise a bit (not much, though: according to the USDA, all farm and agribusiness wages account for less than 3% of food costs), but since farms would be competing against other farms, the change wouldn’t make farms uncompetitive against each other.

That’s a good point, though that 3 percent figure is an average that includes processed food. It’s higher for fresh food, and higher for some crops than for others. That said, raising the wage of field workers wouldn’t raise overall food prices very much. Food from other countries would become more competitive than it is now, but maybe not by very much. 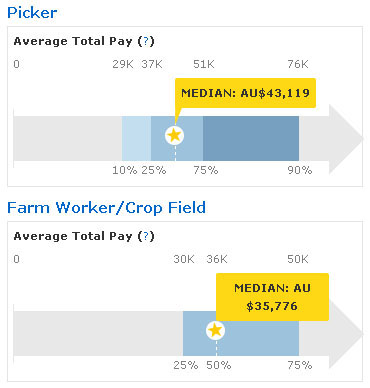 Next up is reader DS, who makes the same point plus another one:

Farm laborers in Australia make much more than American ones. And yet they still have a functional agricultural sector. It turns out that allowing companies to import an unlimited number of foreign workers desperate to work at a wage of epsilon will create shitty working conditions and low wages!

Labor costs as a percentage of consumer cost of most fruits and veggies are pretty tiny. Even for fruits like raspberries, they’re on the order of 15-20%, and for most crops they’re much lower. You could double or triple labor prices and, even if all the costs are passed off to consumers and there are no productivity boosts, there still wouldn’t be particularly large increases in produce prices.

This is not a subject that I’ve spent a lot of time on, so I’m mostly passing this along without comment.