Ionut Budisteanu, a high-school student from Romania, has invented a system that slashes the price tag of driverless cars:

“The most expensive thing from the Google self-driving car is the high resolution 3-D radar, so I was thinking how I could remove it,” he told NBC News. His solution relies on processing webcam imagery with artificial intelligence technology to pick out the curbs, lane markers, and even soccer balls that roll onto the road. This is coupled with data from a low-resolution 3-D radar that recognizes “big” objects such as other cars, houses, and trees.

All of this information is collected and processed real time by a suite of computers that, in turn, feed into a “supervisor” computer program that calculates the car’s path and drives it down the road….The high-resolution 3-D radar used by Google, he 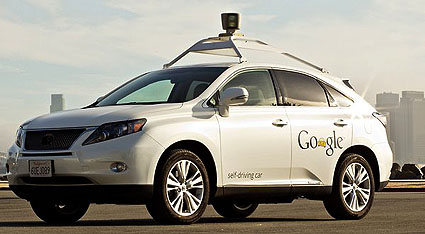 Actually, it’s not the cost savings that are interesting here. Google’s engineers are undoubtedly well aware of cheaper alternatives to their high-res radar, but have stuck with their current system because it provides better feedback and price is no object when you’re still in the prototype stage. What’s interesting is the fact that Budisteanu’s system essentially replaces Google’s expensive hardware with cheap processing power. This is one of the keys to the future of artificial intelligence. As recently as a few years ago, Budisteanu couldn’t have done what he did because the processors then available wouldn’t have been powerful enough. Today they are, which means that brute force plus some software can do the same thing as Google’s sophisticated radar.

Brute force isn’t the answer to all AI problems, but lots of processing power is a minimum necessary component. Without it, you simply have no chance of coming close: a hamster-sized brain can’t solve differential equations no matter what you feed it. But once you get a bigger, faster brain, possibilities start to open up that seemed impossible only a short time before. Budisteanu’s invention is a pretty good example of this.