Once again, I haven’t been paying attention. I knew that Kansas had passed a law saying that any law which “violates the second amendment to the constitution of the United States is null, void and unenforceable in the state of Kansas.” It was a silly piece of legislation since it begs the question of just who decides whether a law violates the Constitution, but in any case, it all seemed vague enough that I didn’t pay it much mind.

But it turns out that the Kansas statute isn’t as vague as I thought. It also says that the federal government is forbidden from enforcing any law regarding “a firearm, a firearm accessory, or ammunition that is manufactured commercially or privately and owned in the state of Kansas and that remains within 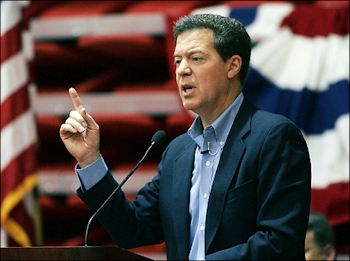 the borders of Kansas.” This is (a) quite specific, and (b) pretty obviously not something Kansas can do on its own, as Attorney General Eric Holder has tartly pointed out. So what’s going on?

Most of the commentary I’ve read assumes that this is basically a gun issue, a Second Amendment issue, and a nullification issue. But I don’t think so. It sounds, rather, like a test case for the Commerce Clause, the same thing that was at issue in last year’s Supreme Court Obamacare ruling. Basically, Kansas is saying that the federal government can’t regulate something that’s made, sold, and used entirely within the confines of Kansas, because that’s not interstate commerce. However, the Supreme Court ruled otherwise long ago in the case of Wickard vs. Filburn, which you probably all got sick of reading about last year. In that case, the court ruled that Congress could regulate even the purely local production of wheat “if it exerts a substantial economic effect on interstate commerce and this irrespective of whether such effect is what might at some earlier time have been defined as ‘direct’ or ‘indirect.'”

So it sounds to me like Kansas Gov. Sam Brownback and Secretary of State Kris Kobach are hoping to make this a test case that will rein in the scope of Congress’s power to regulate interstate commerce. Here’s an AP dispatch from a few weeks ago with a bit more detail:

No major gun manufacturers have production lines in Kansas, so the measure would be aimed at firearms or ammunition made at small machine shops. The measure makes it a felony for a federal agent to attempt to enforce laws, regulations or treaties restricting access to such firearms, ammunition or accessories.

This makes it clear that the new law doesn’t have much real-life impact on guns, since virtually all guns in Kansas are manufactured elsewhere. Its main purpose is simply to test the Commerce Clause. Brownback and his friends seem to be betting that even though the Supreme Court didn’t overturn Obamacare last year, the opinions in the case show that a conservative majority is itching to take another crack at the Commerce Clause. The only question is whether they can find a good test case, and then goad the feds into prosecuting their guinea pig so that they can go to court. We’ll see.

UPDATE: Oh hell, I’m way behind. It turns out this whole thing started several years ago in Montana with a guy named Gary Marbut, who came up with a scheme to evade federal gun restrictions by building a gun that never crosses state lines. Our own Tim Murphy reports that the idea then went viral in the conservative community:

Lawmakers in 34 states have introduced copycat versions of Marbut’s Firearms Freedom Act, six of them in the five weeks since the massacre at Sandy Hook Elementary School in Newtown, Connecticut. All told, nine state attorneys general have signed onto an amicus brief supporting him; eight governors have signed it into law. The National Rifle Association supports Marbut’s law; so does the Cato Institute.

Read the whole thing for all the deets.