Guns have never been a hot button for me. On a pragmatic level, I don’t think they have a big effect on crime. On a constitutional level, I’ve long accepted that the Second Amendment does indeed confer a personal right to bear arms. (A limited right, sure, but that’s true of every right in the Constitution.) And on a political level, it’s obvious that America has a long and deep cultural attachment to guns that simply isn’t going away.

But last week the NRA proudly announced a new president: James Porter, a man who, among other things, refers to Barack Obama as a  “fake President”; apparently thinks the Civil War was a great example of an armed citizenry resisting Northern tyranny; and advocates training all 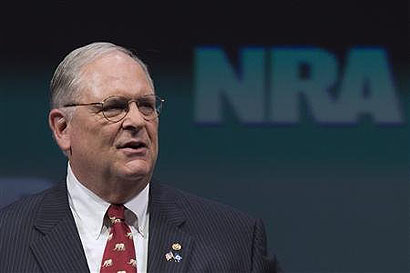 civilians in the use of standard military firearms so “they’re ready to fight tyranny” yet again. Fellow Southerner Ed Kilgore is distinctly unamused:

Am I perhaps being unfair to these people in suggesting that they are behaving like America-haters and are flirting with treason? I don’t think so. Porter and those like him could dispel this sort of suspicion instantly, any time they wanted, by just saying: “Let’s be clear: the kind of ‘tyranny’ we are arming ourselves to forestall is something entirely different from anything Americans have experienced since we won our independence—a regime engaged in the active suppression of any sort of dissent, and the closure of any peaceful means for the redress of grievances. We’re not talking about the current administration, or either major political party, as presently representing a threat of tyranny.”

I’m not holding my breath for any statements like that to emerge from the NRA, or indeed, from the contemporary conservative movement. It’s ironic that people who almost certainly think of themselves as patriots—perhaps as super-patriots—are deliberately courting the impression that loyalty to their country is strictly contingent on the maintenance of laws and policies they favor, to be achieved if not by ballots then by bullets. Republican politicians should be repudiating such people instead of celebrating them, accepting their money and support, and even adopting their seditious rhetoric.

Normally, I’d brush off Porter’s comments as nothing more than a guy blowing off steam in front of a friendly audience. And to a large extent, I do. Still, Ed is right. If an imam in Brooklyn toured the country saying stuff like this, no one would just laugh it off. Ditto for a Black Panther or the head of the American communist party. Fox News would go ballistic.

This kind of stuff has gone well beyond the stage of being a joke or merely a way to rally the troops, and it’s long past time for some of the alleged adults in the conservative movement to rein it in. Enough’s enough. Guns have never been a hot button for me in the past, but the NRA is sure working hard to make them into one.