The Benghazi “scandal” has remained a conservative pet rock for far longer than anyone had any right to expect. One reason is that it’s become a game of whack-a-mole: you debunk one “stand down” conspiracy theory and another takes its place. First it was a fast-response team that President Obama refused to deploy. Then it was an enterprising colonel who was relieved of duty for getting to ready to send in a team even though he had orders not to. Then it was a team in Tripoli. Then a C-110 team in Croatia. Then it was yet another team in Tripoli. Basically, the facts didn’t matter. The tea party crowd had convinced itself that Obama was a craven political schemer who refused to mount a rescue of American troops in danger, so they figured that one of these stories just had to be true.

Today, Dave Weigel says that more or less the same thing is going on with the IRS scandal. Conservatives just know that somehow this all came from the top. It happened because Obama was in a panic over the power of the tea party movement, so he put out orders to crush it. In some tellings—this is the “culture of intimidation” story—he merely made his wishes known and the bureaucracy leaped to obey. In other versions he personally met with the IRS director 157 times to make sure his plans were being carried out. Other stories implicate his top staff. An even newer version veers away from harassment of tea party groups over their tax exempt status—which, let’s 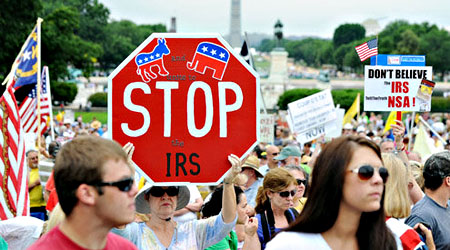 face it, is about the least effective way imaginable of trying to silence them—and is now focused on Obama’s even more insidious campaign to directly audit and torment important Republican donors.

Today, Stan Veuger of AEI, a recently minted PhD apparently trying to make a name for himself, presents yet another theory. Tea party groups, he says, presented an “existential threat” to Obama’s reelection, and it turns out that failing to approve their tax-exempt status “would have been an effective campaign strategy going into the 2012 election cycle.” His paper examines how rainfall affected attendance at tea party rallies, and how that in turn affected Republican turnout in the 2010 election. If you then assume that 2012 was just like 2010, and that jitters over tax status dramatically affected tea party effectiveness, it turns out that Obama stole the 2012 election from Romney! Specifically, “had their effect on the 2012 vote been similar to that seen in 2010, they would have brought the Republican Party as many as 5 – 8.5 million votes compared to Obama’s victory margin of 5 million.” Weigel calls this out for the nonsense it is:

OK, starting with the general agreement that the IRS shouldn’t have leaned so hard on the Tea Party, let’s further agree that this is madness. Leave aside the fact that most real political activity credited to the “Tea Party” was organized by groups—FreedomWorks, Americans for Prosperity—that have had favorable tax status for years. From January 2009 to November 2010, the Tea Party went from zero to more than thousand groups. From December 2010 to November 2012, the movement was growing less popular for reasons that had nothing to do with individual groups’ tax status. A November 2010 Quinnipiac poll gave the Tea Party a mildly negative 34-38 favorable rating; a year later this had fallen to a 29-42 favorable rating. Politics and life had intervened, and the “Tea Party’s” role in the debt limit showdown (i.e., starting the showdown in the first place) was wildly unpopular. Simultaneously, a slowly growing economy was making the president more popular.

So why assume that the movement would have continued to grow at its 2009-2010 pace even after the environment for its growth had been radically altered?

Why indeed? It doesn’t even remotely make sense. But it’s good enough for AEI! I fully expect this study to be the lead segment on Hannity tonight. As Weigel says, “We’re not even close to the end of IRS scandal-oriented theories of liberal treachery.”