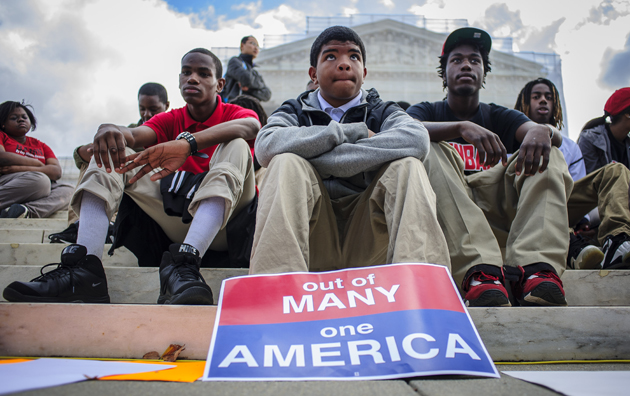 Affirmative Action supporters rally outside the US Supreme Court in 2012.Pete Marovich/ZUMAPRESS.com

Although the Supreme Court’s decision earlier this week in the University of Texas affirmative action case was basically a punt, the end appears to be very near for racial preferences in university admissions. The case was sent back to the Fifth Circuit Court for review, and the majority opinion said that the court could uphold affirmative action only if “no workable race-neutral alternatives would produce the educational benefits of diversity.” That’s a very stiff test, and one that neither UT nor any other university is likely to meet.

Still, there’s no question that in practice, even well-designed class-based policies would probably represent a net loss for minority representation. But it’s a fairly modest loss, and class-based policies also have some advantages—quite aside from the fact that we might soon be forced into using them whether we like it or not. For one thing, they help poor people. That’s worthwhile all by itself, since elite universities are notorious for the affluence of their student bodies. Current affirmative action programs mostly select rich and upper-middle-class minorities, something that even Barack Obama admits isn’t fair. “My daughters should 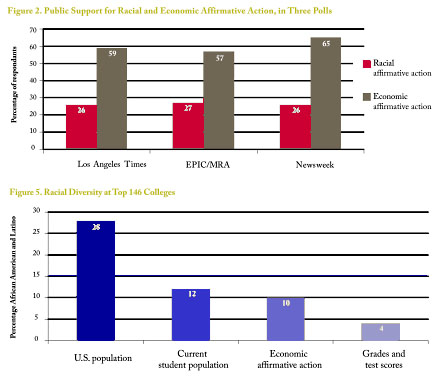 probably be treated by any admissions officer as folks who are pretty advantaged,” he told George Stephanopoulos back in 2007, “and I think that there’s nothing wrong with us taking that into account as we consider admissions policies at universities.”

And there’s more. Carnevale and Rose concluded that class-based policies produce higher graduation rates than either a pure merit-based system (test scores and high school GPAs) or a traditional affirmative action program. And eliminating race-based policies would also put an end to the suspicion that continues to dog black and Latino college graduates from employers who wonder if their degrees were really fairly earned.

Would it be possible for us to adopt class-based programs? One obstacle, as I wrote a couple of years ago, is the insistence of conservatives on refusing to even admit that racism is a problem anymore. It’s become practically a truism on the right that racism is a thing of the past, nothing more than a convenient whipping boy to be exploited by race hustlers like Jesse Jackson and Al Sharpton who prey on liberal guilt and federal largesse. This is just poisonous, and it justifiably provokes a defensive attitude on the left. There’s no way that blacks or any other ethnic minority will ever take conservative complaints about affirmative action at face value if they flatly refuse to concede that there’s even a problem left to be addressed.

But that shouldn’t stop us. We should be forthright in conceding that class-based policies are likely to produce slightly lower minority representation at elite universities. But well-designed policies can make that loss very small, and the advantages of class-based policies go a long way toward making up for that. It’s something we should face up to before we’re forced into it whether we like it or not.