Barton Gellman has a big piece in the Washington Post today about NSA’s codenamed surveillance programs that draws on “a classified NSA history of STELLARWIND and interviews with high-ranking intelligence officials.” STELLARWIND, an umbrella name for the 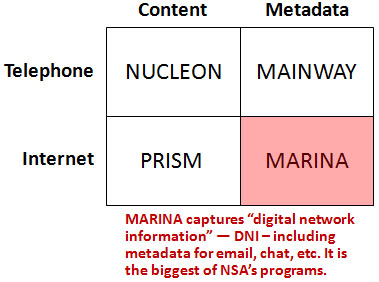 Two of the four collection programs, one each for telephony and the Internet, process trillions of “metadata” records for storage and analysis in systems called MAINWAY and MARINA, respectively. Metadata includes highly revealing information about the times, places, devices and participants in electronic communication, but not its contents. The bulk collection of telephone call records from Verizon Business Services, disclosed this month by the British newspaper the Guardian, is one source of raw intelligence for MAINWAY.

The other two types of collection, which operate on a much smaller scale, are aimed at content. One of them intercepts telephone calls and routes the spoken words to a system called NUCLEON.

For Internet content, the most important source collection is the PRISM project reported on June 6 by The Washington Post and the Guardian. It draws from data held by Google, Yahoo, Microsoft and other Silicon Valley giants, collectively the richest depositories of personal information in history.

….The Post has learned that similar orders have been renewed every three months for other large U.S. phone companies, including Bell South and AT&T, since May 24, 2006. On that day, the surveillance court made a fundamental shift in its approach to Section 215 of the Patriot Act, which permits the FBI to compel production of “business records” that are relevant to a particular terrorism investigation and to share those in some circumstances with the NSA. Henceforth, the court ruled, it would define the relevant business records as the entirety of a telephone company’s call database.

Gellman also tells us for the first time what it was that caused the famous 2004 showdown in John Ashcroft’s hospital room:

Telephone metadata was not the issue that sparked a rebellion at the Justice Department, first by Jack Goldsmith of the Office of Legal Counsel and then by Comey, who was acting attorney general because John D. Ashcroft was in intensive care with acute gallstone pancreatitis. It was Internet metadata.

At Bush’s direction, in orders prepared by David Addington, the counsel to Vice President Richard B. Cheney, the NSA had been siphoning e-mail metadata and technical records of Skype calls from data links owned by AT&T, Sprint and MCI, which later merged with Verizon.

For reasons unspecified in the report, Goldsmith and Comey became convinced that Bush had no lawful authority to do that.

In other words, it wasn’t the collection of telephone records that upset Comey, it was the collection of email, chat, Skype and other internet communications records. There’s more at the link about the showdown over the data collection programs, as well as the secret policies and legal opinions that govern exactly what NSA can and can’t do.