For reasons not entirely clear to me, the entire world seems to have decided over the weekend that Larry Summers is likely to be President Obama’s choice to succeed Ben Bernanke as Fed chair. I can’t tell if this is because Obama has truly made up his mind, or if it’s mostly due to the awesome agenda-setting power of Ezra Klein. But either way, it’s the talk of the moment among the tiny fraction of the population that cares about the Fed.

There’s not much point in recounting the entire conversation of the past few days. It boils down to a couple of pretty simple points. (1) Larry Summers is really smart, but he’s also something of an asshole and a loose cannon. (2) Janet Yellen, the 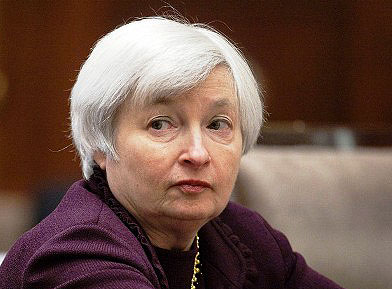 other serious contender, has lots of experience, a better bedside manner, terrific qualifications in monetary policy, and a pretty good track record of being right on the big issues. In other words, Yellen is really the obvious choice.

I agree, but for a different reason. When Ben Bernanke’s first term was up, I opposed his renomination not because I thought he had done a terrible job, but because I thought the next few years called for someone with a real dedication to regulating the financial industry. Bernanke had simply never shown any enthusiasm for this. But as Felix Salmon notes this morning, Larry Summers is far worse on this dimension:

Summers is, to put it mildly, not good at charming those he considers to be his inferiors, but he’s surprisingly excellent at cultivating people with real power.

What’s more, the move would be a calculated snub to bien pensant opinion. Never mind the utter shambles that Summers made of Harvard, or the way he treated Cornel West, or his tone-deaf speech about women’s aptitude, or the pollution memo, or the Shleifer affair, or the way he shut down Brooksley Born at the CFTC, or his role in repealing Glass-Steagall, or his generally toxic combination of ego and temper — so long as POTUS likes Larry, and/or so long as Summers is good at working key Obama advisors like Geithner, Lew, and Rubin, that’s all that matters.

The choice of Summers would also be the clearest signal yet that Obama feels that he did what needed to be done to deal with the financial crisis, and that financial reform is, for the rest of his presidency, going to be a very low priority. Summers is a deregulator in his bones; he didn’t like the consumer-friendly parts of Dodd-Frank, and his actions have nearly always erred on the side of being far too friendly to Wall Street. He considers monetary policy to be largely irrelevant in a zero interest rate environment, and there is no chance whatsoever that he would take a robust leadership role with respect to the Fed’s other big job, which is regulation.

Congress isn’t likely to approve any new financial regulations over the next few years, which makes the Fed chairman’s role even more important than usual. She’ll be responsible for a tremendous amount of regulatory interpretation, goal setting, and resource allocation based on existing law. My sense is that although Yellen might not be a barn burner on this stuff (though who knows?), Summers would almost certainly be terrible. He’s just constitutionally hostile to the idea of reining in the free operation of the financial sector.

Even if there were no other reasons, this makes Yellen the better choice. Obama might personally like Summers, but he’s the president of the United States, not president of the senior class. He should pick the best candidate, not his best pal.