During the last debt ceiling debacle, House Speaker John Boehner came up with the idea of “dollar for dollar”: House Republicans would agree to increase the debt ceiling by a dollar for every dollar that President Obama agreed to cut spending. But for Round 2, coming later this year, Rep. Tom Price says this idea is out the window:

There are two reasons to laugh at this. The first is Price’s suggestion that it would be merely “difficult” to completely eliminate discretionary spending. That’s reality-based!

The second reason is that apparently Price doesn’t understand his own party’s previous position. “Dollar for dollar” always applied to the 10-year budget window, which means it really should have been called “a dollar for a dime.” Over the next 10 years, the 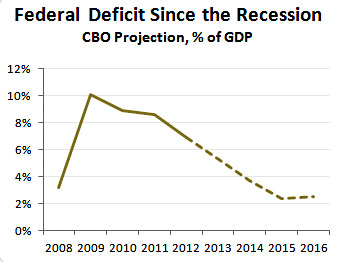 discretionary budget amounts to more than $10 trillion, which means that a trillion-dollar increase in the debt limit would require only $100 billion per year in discretionary cuts.

In any case, I suppose it’s a good sign that Republicans have decided the discretionary budget has been squeezed about as much as it can be. Perhaps the sequester has had an effect on them after all. Still, I wonder what they’re thinking with their shiny new “menu-based” approach to hostage taking? Do they really think that Obama is going to happily choose one from Column A and two from Column B in order to get a debt ceiling increase out of Congress? He’d be mad to even hint that he’s willing to bargain on these terms. And he’d be madder still to hint that he’s willing to privatize Medicare in return for a debt ceiling increase, as Republicans seem to think he might.

The tea partiers have painted themselves into a corner. The economy is slowly recovering, and the deficit is falling, but they’ve promised ever more hostage taking anyway, and now they have to follow through. But their proposals combine arrogance and amateur-hour theatrics in a way that practically guarantees failure. They sound like a bunch of eight-year-olds who think they’ve come up with an oh-so-clever way to trap dad into raising their allowance or something. But Obama isn’t running for reelection anymore. All he has to do this time around is say no, and stick to it. If Republicans decide to flush the economy down the toilet in a fit of pique anyway, then maybe it really is platinum coin time.