My sprained ankle is recovering nicely, but I’m still taking more frequent breaks than usual to elevate it and keep the swelling down. Naturally that means more TV watching, which is how I ended up viewing a segment on Fox a few minutes ago about President Obama’s declining approval rating on the economy in the latest Gallup poll. Both the fill-in anchor and Fox’s poll analyst claimed to be puzzled: the economy is showing signs of life lately, after all. So how is it possible that Obama’s approval ratings were falling?

The poll analyst had an answer ready: Obamacare. You see, as it becomes ever clearer that Obamacare is a raging disaster, people are assuming that means disaster for the economy as well. They think it means higher taxes, bigger deficits, more inflation, higher 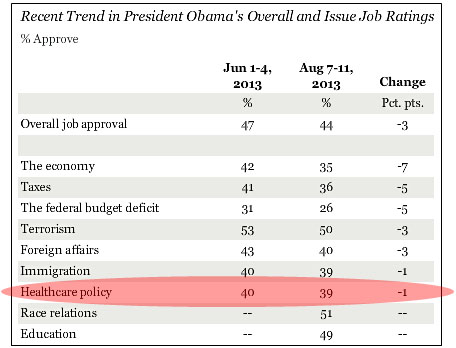 copays, etc. etc. etc. And what with all the news about pieces of the law being postponed, clearly the public really is expecting a disaster of biblical proportions.

Perhaps this just sounds like standard Fox News nitwittery? Not at all! Because the two on-air personalities weren’t just shooting the breeze about stuff they had no evidence for. They did have evidence. They had the evidence of the very same Gallup poll they were commenting on in the first place. You see, Gallup actually asked people if they approved of Obama’s healthcare policy. And guess what? It’s pretty much unchanged. If the American public is expecting an epic healthcare meltdown over the next few months, they sure aren’t showing it. And they sure aren’t blaming Obama for it.

This is what sets Fox News apart from the common herd. Aside from Shep Smith, whose bipartisan contempt for idiocy appeals to me, I barely ever watch Fox. I only do it in the mornings if I have to spend some time doing a boring exercise, or elevating my ankle, or something similar that plunks me in front of the TV. But despite the rarity of that happening, practically every segment I ever see produces some kind of obvious boneheaded misdirection that’s worthy of a blog post. Every one. It’s amazing. It’s one thing to blather on in the absence of facts, but it’s quite another to deliberately ignore evidence right in front of your face because it would interfere with whatever agitprop you happen to feel like phoning in. At some point, you’d think it would get embarrassing, especially on what’s supposed to be a straight-news show. But it never does.