I’ve written before about my belief that health care costs in the United States have been trending downward for a long time. Not just during the aughts (which everyone seems to agree about), but since the early ’80s. Click here for a refresher.

Last week brought some confirmation of this from the Congressional Budget Office. Michael Levine and Melinda Buntin took a look at Medicare spending per beneficiary over the past three decades and came to a very similar conclusion: “Growth in spending per beneficiary in the fee-for-service portion of Medicare has slowed substantially in recent years. The slowdown has been widespread, extending across all of the major service categories, groups of beneficiaries that receive very different amounts of medical care, and all major regions.”

Their basic chart is below. It starts in 1980, but I think it’s better to omit 1980-82. Inflation was very high in those years, which makes Medicare spending growth look artificially high and the subsequent decline artificially steep. However, consumer inflation has been pretty low and steady since then (at around 2 to 3 percent), so inflation doesn’t muddy the picture much after 1983. I’ve drawn an eyeball regression line starting then and it still tells much the same story: 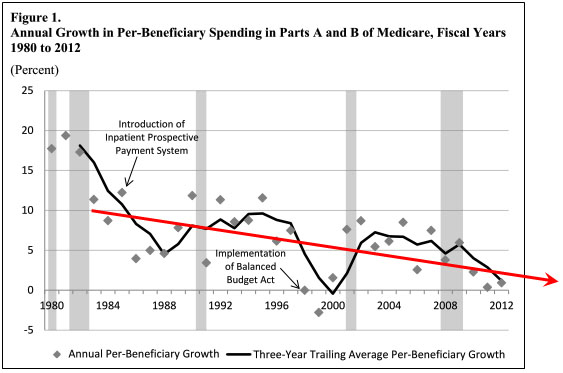 The second reason is more intriguing. Levine and Buntin note that there have been two previous major declines in Medicare spending, and in both cases they were driven by legislative changes. But over the past decade, we’ve seen another steady decline with nothing to explain it:

The current slowdown cannot be so easily ascribed to a set of changes in payment policy or program structure. As described above, legislation governing payment rates probably did slightly less to restrain growth in the second part of the decade than it did earlier on.

The financial crisis and economic downturn […] do not appear to explain much of the slowdown. First…from 2000 to 2005, the growth in the average payment rate programwide was similar to growth in the CPI-U. Second, we did not find evidence to suggest that beneficiaries’ considerable loss of wealth and reduced income growth significantly affected their collective demand for care. Third, it is not clear whether the recession played a role in reducing the rate at which providers purchased new, cost-increasing technologies. Finally, and in contrast, some evidence suggests that high unemployment during the recession boosted providers’ incentives to deliver services to Medicare beneficiaries by reducing the demand for care in the private sector, though we could not empirically confirm the mechanisms by which unemployment might have had such an effect.

The lack of a single big legislative explanation suggests that there’s something more organic going on. And with Obamacare’s cost controls set to kick in over the next decade, we could be entering a virtuous circle of reined-in health care spending for years to come.

Levine and Buntin acknowledge that there’s considerable uncertainty in their analysis. There are a lot of moving parts here, and the truth is that a decade isn’t really a very long time frame to hang your hat on. (Remember all those economic models that assumed housing prices could never fall because they were based on the previous decade’s worth of data?) And it’s worth keeping in mind that even if spending per beneficiary stabilizes, Medicare is still going to have a lot more beneficiaries over the next half century as baby boomers retire and our population ages.

Nonetheless, evidence is mounting all over the place that the spiraling growth of health care costs, which has been a serious bogeyman for the past few decades, might finally be receding. Since health care costs are by far the biggest component of future concerns over federal spending and federal deficits, this suggests that our future may be brighter than we think.