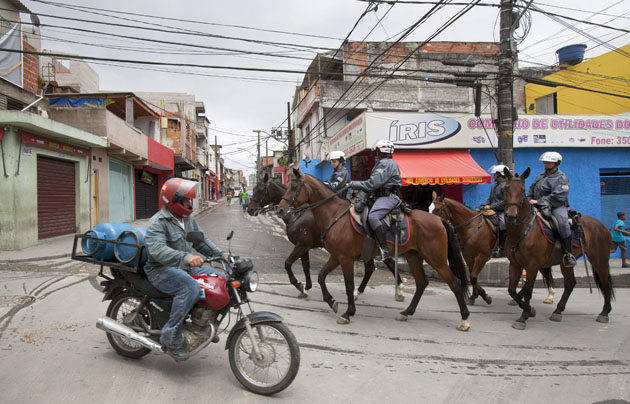 Members of the Police during a security operation at the ParaisOpolis shanty in Sao Paulo, Brazil.Sebastio Moreira/Zuma

By now, you’ve all read my story about the link between the decline of leaded gasoline and the decline of violent crime, right? Here’s an update from an unexpected source: the state of São Paulo in Brazil.

Obviously the United States isn’t the only place that got rid of leaded gasoline, which means the United States isn’t the only place that should have seen declines in violent crime. But other countries made the switch at different times, which means their declines in violent crime should also have taken place at different times. Rick Nevin has done a lot of work on crime trends outside the U.S., so after my piece appeared, I asked him for his predictions for other parts of the world. Here was one of them: “Crime will also plummet over the next 10 to 20 years in Latin America, where leaded gasoline use and air lead levels fell sharply from around 1990 through the mid-1990s.” (Crime rates generally start to decline about 20 years after unleaded gasoline is introduced.)

Well, guess what? A few days ago the Wall Street Journal ran a piece about killings by police in São Paulo state. As an aside, they printed the chart on the right, which shows São Paulo’s homicide rate, and as you can see, it’s declined considerably since 2000.

Is this another triumph for unleaded gasoline? Sort of, but the story is actually a little more interesting than that. Here’s Nevin, after noting that air lead levels in São Paulo declined by 65 percent in the early 80s, earlier than in most other Latin American regions. But why?

The 1980-1985 drop in São Paulo air lead was not the result of a deliberate effort to reduce lead exposure: It was the side effect of efforts to reduce Brazil’s dependence on imported 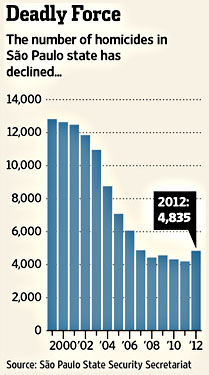 oil. Brazil started its gasoline substitution program in 1975, and began large-scale production of E95 (lead-free) fuel ethanol for vehicles running on straight alcohol in 1979. By 1984, E95 fuel accounted for almost one-third of all vehicle fuel in Brazil, and E95 accounted for almost half of all vehicle fuel in Brazil in 1987.

There’s more in Nevin’s full paper, including some bad news for one Latin American country: “Venezuela did not even introduce unleaded gasoline until 1999, and was one of the last countries to eliminate leaded gasoline, in 2005. In 2010 and 2011, Venezuela had the fourth highest national murder rate in the world. Nobody should be surprised if it records the highest national murder rate sometime in the next few years.” So be careful if you plan to visit Caracas anytime soon.