On Friday I mentioned that Sen. Ted Cruz has a problem. He wants to block funding of Obamacare, but he can’t just filibuster the budget bill that the House has sent over. After all, that bill does what he wants: it defunds Obamacare. So he has to let the Senate consider the bill. But once he does that, Harry Reid can pass an amendment that strips out the defunding language with a simple majority vote and Cruz loses. It’s a knotty little 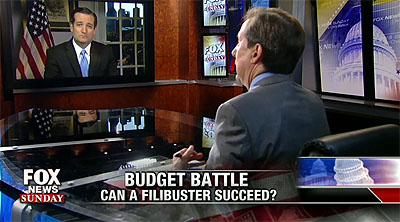 problem, and today Chris Wallace asked him about it. Here’s what he said:

WALLACE: Well, I’m confused. Are you going to block consideration of the bill? ….

CRUZ: Well, the first order of business is going to be to ask Harry Reid if he will agree to allow amendments to be subject to a 60-vote threshold….Now, in all likelihood, he’s going to say no….If he does that, then Senate Republicans have the tool that we always used when the majority leader is abusing his power, which is we can deny cloture. We can filibuster and say we will not allow you to add the funding back for Obamacare with just 51 votes and it takes —

WALLACE: Sir, if I may, you say this is brute political power. Other times, you said it’s a procedural gimmick. It’s Senate Rule 22, which has been around for years. It’s part of the Senate rules and it says after you allow debate, after you take cloture, that you can pass an amendment by a simple majority. That’s the rule.

CRUZ: Chris, what’s good for the goose is good for the gander. You’re right, that is one rule. But there is another rule that says it takes 60 votes to get cloture. And that’s the reason the Senate, generally, on controversial votes, we work out an agreement for it to be subject to a 60 vote threshold….And so, if Harry Reid says, you know what, I’m going to run the Republicans over. I’m going to ignore the bill passed by the House of Representatives, I’m going to ignore the will of the people and I’m going to do this on a 51-vote threshold — then, from my mind, it should be easy decision for Senate Republicans to stand united and to support House Republicans.

Cruz is a good talker, you have to give him that. But this appears to be his answer: Unless Reid agrees beforehand to Cruz’s demands, he’s going to filibuster the House bill even though it includes language defunding Obamacare.

Can he get most of the Republican caucus in the Senate to go along with this? I doubt it—not in the long run, anyway. Cruz isn’t willing to admit that a Republican filibuster against the House Republicans’ own bill would strike the American public as ridiculous, but it would. And if he starts droning on about procedural minutiae, everyone outside the Fox News faithful will tune out after a few seconds.

As for trying to blame an ensuing government shutdown on President Obama, he demonstrated once again today why that won’t work: He made it crystal clear that he was the one actively working to shut down the government unless his demand to defund Obamacare was met. Again, outside the Fox News faithful, he’s just not going to convince anyone that up is down and black is white on this. Everyone knows whose idea this has been all along.

It’s possible that Senate Republicans might stand with Cruz for a few days, just to prove their conservative bona fides. Maybe. I guess it depends on how many of them break ranks due to their sheer personal loathing of Cruz.1 But either way, they’ll let the bill go through before long. There are just too many of them who understand how this will play out in the real world. They aren’t willing to risk a rerun of 1995 for a cause they know is lost.

1Robert Costa tweets: “Emails from House and Sen GOP aides pouring in; furious w/ how Cruz is pressuring McConnell, Boehner to folo his lead….The real fear within GOP right now: Suddenly, if you don’t folo Cruz-Palin on defund strategy, you risk RINO tag and g’roots wrath….Sen aide tells me a dozen+ GOP sens are fuming this am over Cruz making a vote to proceed (CR cloture) seem like support for law they hate.”