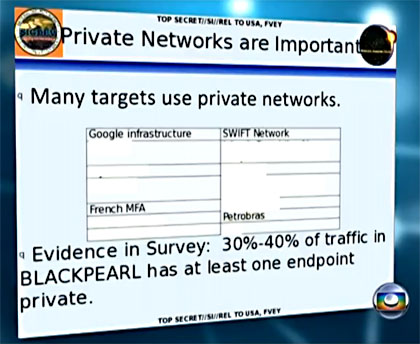 Henry Farrell catches something interesting today. In a show on Brazilian TV about NSA surveillance, the PowerPoint slide on the right appears on the screen. Among other things, it suggests that the NSA has targeted the SWIFT payment network for penetration.

Now, it’s always a good idea to take PowerPoints with a grain of salt, and it’s worth noting that this one is even less clear than usual. It merely says that many targets use private networks, which doesn’t necessarily mean that the NSA has actually cracked these networks. At the very least, though, this slide certainly implies that NSA is trying to crack them.

Here’s why this is interesting. You may recall that shortly after 9/11, the Bush administration worked out a deal with SWIFT officials to turn over all or most of their database voluntarily on a monthly basis. The idea was to use the information to try and track the money flows of al-Qaeda and other terrorist networks. That lasted until 2006. Farrell picks up the story from there:

When EU decision makers became aware of this (thanks to a New York Times story which the Bush administration tried to get spiked), there was political uproar, resulting in the negotiation of a framework under which the US agreed to impose limits and safeguards in return for continued access.

….This is interesting for two reasons. First — the EU thought the US had signed onto a binding deal on access to SWIFT data. If, as appears likely at this point, the US was letting the EU see what it did when it came in through the front door, while retaining a backdoor key for the odd bit of opportunistic burglary, it will at the least be highly embarrassing. Second — there are people in the EU who never liked this deal in the first place, and have been looking for reasons to get rid of it….If the US has demonstrably lied to the EU about the circumstances under which it has been getting access to SWIFT, it will be hard for the EU to continue with the arrangement (and, possibly, a similar arrangement about sharing airline passenger data) without badly losing face. Even though the people who dominate the agenda (officials in the Council and European Commission) probably don’t want to abandon the agreement, even after this, they’ll have a bloody hard time explaining why they want to keep it. The EU-US homeland security relationship, which had been looking pretty cosy a few months ago, is now likely to be anything but.

Of more interest to the Brazilian reporters, of course, is the fact that Petrobras, their national oil company, is an NSA target. And the French will certainly be interested in the fact that their Ministry of Foreign Affairs network is also a target. Stay tuned for further fireworks.