So this is unexpected:

Lawrence H. Summers, the former Treasury secretary and senior White House economic adviser, has withdrawn as a candidate for Federal Reserve chairman, in a startling development that raises urgent questions about who will lead the central bank when Fed Chairman Ben S. Bernanke steps down in four months.

….People close to the White House said Summers faced not only a rebellion among liberal Democrats but also other challenges, including a debate over whether to launch military strike against Syria that stretched out the Fed process and gave more time for opposition to build.

“It was just a perfect storm of bad timing,” said one person close to the White House, who requested anonymity in order to speak candidly about private deliberations. “It would have been absolute war, and the president would have had to spend all of his political capital. Larry decided not to drag him through it.”

I don’t have a lot to add to this. Obviously Summers concluded that the brewing liberal rebellion in the Senate, which already includes three Democrats publicly opposed to his nomination, was only likely to get worse. He’s probably right about that. Nonetheless, it was 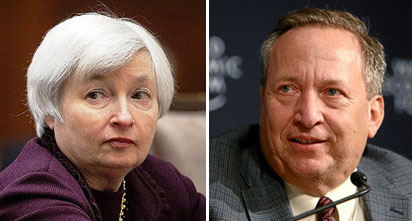 a decent thing to do, so props to him for gracefully removing himself from a post that he so obviously wanted.

The liberal revolt against Summers had lots of reasons. It was, as they say, overdetermined. But I’ll toss out one additional reason that hasn’t gotten much attention but might have been lurking in the background: President Obama’s renomination of Ben Bernanke as Fed chairman in 2009. It’s not that Democrats hated Bernanke, but his renomination certainly sent a message that only a non-liberal could be trusted to run the Fed. That rankled, and this time around it worked against Summers. He wasn’t perceived as conservative, obviously, but fairly or not, he was certainly perceived as less liberal than progressive Democrats had a right to expect from a fellow progressive Democrat.

In any case, the front runner now is certainly Janet Yellen, and presumably that’s who Obama will now nominate. She won’t have any trouble with Democrats, but it will certainly be interesting to see if Republicans, after having one of their own run the Fed for seven consecutive terms—always with plenty of support from Democrats—will allow Yellen’s nomination to proceed. Since it’s the Senate that has to confirm her, not the House, the odds are in her favor. But only modestly, I’d guess. You may have noticed that Republicans haven’t exactly been cordial toward Obama’s nominees lately. And there’s an election coming up. Don’t uncork the champagne quite yet.