Rate shock is the subject of the day, and I have to confess to a growing unease about it. Here’s why. I think a lot of us expected that young people in good health might see higher premiums under Obamacare. This is largely because Obamacare mandates a maximum 3:1 ratio between premiums for the young and premiums for the old. Roughly speaking, this means that insurers are being forced to charge older buyers artificially low prices, and that in turn forces them to charge younger buyers more. Instead of, say, charging $100 and $500, the 3:1 ratio means they have to charge $150 and $450. In 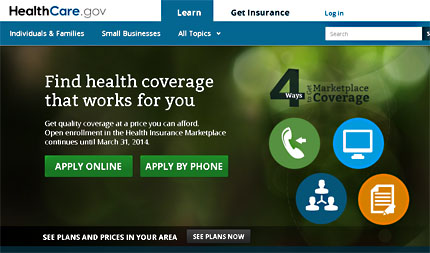 essence, the young are subsidizing the old. Add in the fact that Obamacare forces insurers to provide better coverage, and prices are going to go up even more.

But this means that older buyers shouldn’t see all that much rate shock. After all, they’re getting the benefit of that 3:1 ratio. And yet, they are. A couple of days ago I wrote about the case of Deborah Cavallaro, a 60-year-old woman in Los Angeles who had been profiled on the NBC Nightly News. She currently pays $293 for her coverage, but got a letter saying her plan had been canceled and a replacement would cost $478. I wondered whether her insurance company was simply trying to steer her into a high-cost plan, even though they knew she could do better on the exchange.

In a word, no. I headed over to the California exchange, entered the appropriate numbers, and found a bronze plan from Anthem Blue Cross for $479. Her insurance company wasn’t playing any games.

But maybe this new insurance is better than her existing policy? Michael Hiltzik talked to Cavallaro, who told him that her current policy has a deductible of $5,000 a year, an out-of-pocket max of $8,500 a year, and two doctor visits per year with a copay of $40. (She pays full price for subsequent visits.)

And the Obamacare bronze policy? It has a deductible of $5,000 a year, an out-of-pocket max of $6,350 a year, and three doctor visits per year with a copay of $60. (Subsequent visits are full cost until the deductible is met.)

Now, when you dig into the details, this is indeed slightly better coverage. Lifetime caps are no longer allowed, for example. And Anthem probably would have increased the price of Cavallaro’s policy for 2014 even if Obamacare didn’t exist. On the other hand, the new plan might have a more limited choice of doctors than Cavallaro is getting now. This stuff is probably a bit of a wash, which means that, roughly speaking, the bronze policy costs $2,200 more per year in return for an out-of-pocket max that’s $2,200 lower. Any year in which Cavallaro goes over this max, the Obamacare bronze policy will pay off. Any year in which she stays under it, she’s on the losing end of the deal.

So….I’m not sure what to think about this. The lower out-of-pocket max is a good thing, but basically Cavallaro is now paying for it every year instead of only in the 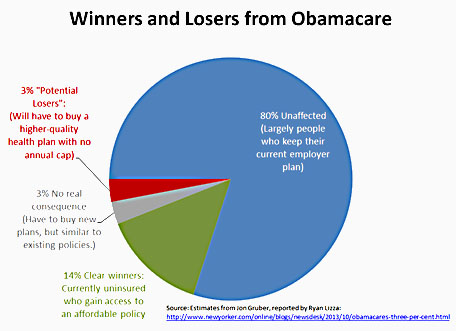 Generally speaking, I’m trying to steer a path between denial and panic on this stuff. As Justin Wolfers illustrates on the right, there are still way more winners than losers under Obamacare. Right now, most of what we’re hearing is anecdotal, and we simply don’t know how everything is going to work out in the end or how many people are going to end up with higher rates. In Cavallaro’s case, as in many others, that will depend a lot on the subsidies she gets. But there’s not much question that any year in which her income is high enough to put her over the subsidy cap, she’ll end up paying quite a bit more for coverage that’s only marginally better. It’s no surprise that she’s unhappy about it.

And the fact that this is happening to 60-year-olds, not just 20-somethings, is a bit of a surprise to me. I’m not going to panic over these stories yet, but the more of them I hear, the less that denial seems like a reasonable response either.