Since I write periodically about gun issues, I’ve long had a vague feeling that I should learn how to shoot a gun someday. Not to become an expert or anything, but just so I have some idea of what’s involved in a tactile, rather than an academic, sense.

So today I did. A friend of mine hauled out his gun collection and showed it to me, and then we headed out to a small indoor range and shot a few rounds each. So how did I do? The first gun on our list was a .40 caliber Beretta semiautomatic. On my first try loading the clip, I put the rounds in backward, which didn’t work so well. So I reloaded, popped the clip in, flipped off the safety, and did my best to hold the gun the way I had been told to. As you can see below, none of my seven rounds managed to hit inside the target area, but five of them did hit the paper. Not bad for a city boy! 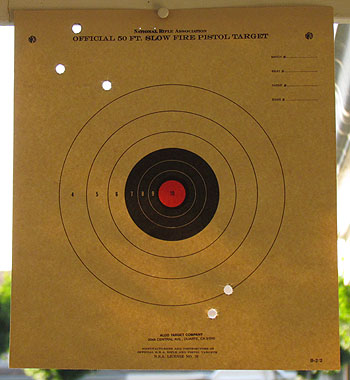 So that’s that: my first time ever firing a gun. I loaded another clip, and on my second try I started to get the hang of lining up the sight and adjusting for the recoil, and did a little better. One round even went into the black. Next, my friend got out a .22 caliber rifle, and we plinked away with that for a while. Those .22 clips are cute little things, aren’t they? Here’s a couple of clips worth in my next target: 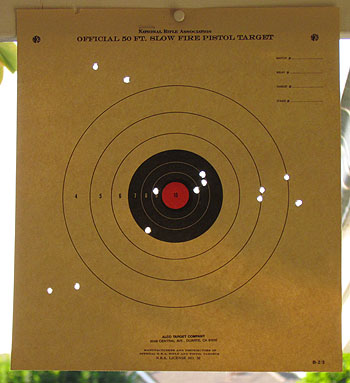 The first set all landed to the left. Then I overcompensated and got the cluster on the right. Then I apparently got it about right, and the next five rounds all went into the black.

Finally, we fired a 1 ounce slug from a shotgun. That puppy has a bit of a kick, doesn’t it? Oddly enough, though, I managed to fire it fairly straight anyway. We were using a silhouette target at that point, and my single round hit it in the shoulder.

So now I know what a gun feels like and how to handle one. That’s about all I know, but I figure any day in which I learn something new is a pretty good day.