God knows, Walter Shapiro has earned the right to be cynical about his fellow ink-stained wretches. Today, he takes on Double Down, the 2012 campaign sequel to Game Change from authors Mark Halperin and John Heilemann. Shapiro thinks that it basically represents the final triumph of the “win the morning” approach to politics:

Double Down is all about shiny objects. It is as if the authors, in a desperate effort to justify their reported $5-million advance, opted for sleight-of-hand to divert readers from the predictable story of the actual 2012 campaign. So after luxuriating over Donald Trump’s ludicrous presidential pretensions early in the book, Halperin and Heilemann devote yet another page to this loathsome self-promoter in their final chapter. The only narrative justification (beyond having another Trump anecdote to peddle on TV) is that Obama’s 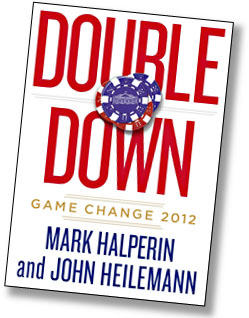 ….Double Down, in truth, peddles bite-sized dramatic nuggets rather than a nerd’s-eye view of how contemporary politics really works. The authors’ guiding philosophy seems evident: If it can’t be hawked on a talk show then it doesn’t belong in the book.

….Halperin and Heilemann show little interest in unraveling one of the enduring mysteries of Campaign 2012: Why did the supposedly data-driven Romney lose touch with reality and believe to the end his overly optimistic internal polls and the eager Republican faces at campaign rallies? For all of its in-the-moment hype, Double Down exudes a slightly musty aroma, as if the authors are uncomfortable with how politics has changed with the advent of social media. In fact, Double Down may be remembered as a historical curiosity—the last campaign retrospective that fails to mention Facebook.

I almost feel sorry for Halperin and Heilemann. The truth is that the 2012 campaign just wasn’t very interesting. Republicans put on an amusing clown show during the primaries and then ended up nominating the most boring person in the world—who, in turn, refused to spice things up with a Sarah Palin-esque choice of running mate. Obama, for his part, ran a Spock-like campaign that only Nate Silver could love. What’s more, there were no novel issues in the campaign, just an endless relitigation of the same themes that had been occupying us for the past three years. There were some gaffes here and there, and Obama’s Denver debate meltdown provided a tiny spark of uncertainty about the election’s final outcome, but even that wasn’t much. Honestly, the result was entirely predictable for at least the final month, and it took heroic spin efforts from the media to pretend otherwise.

So is it any surprise that the book is fairly uninteresting except for the occasional shiny object? Not really. I read Jon Alter’s The Center Holds a while back, and I’m a fan of Alter’s writing. But it was a dull book for anyone who followed the campaign even loosely. Campaign coverage is now so dense and omnipresent that there just isn’t very much we don’t know by the time all the wrap-up books come out. So Halperin and Heilemann can make hay with the odd shouting match that wasn’t reported in real time, but aside from that there just isn’t very much to say. 2012 will go down in history as a pretty routine fight.

Hell, you can’t even say it was the beginning of the nerd era, or the blog era, or the data mining era, or the social media era. That stuff all got started in 2004 and 2008. It got stronger in 2012, and will get stronger still in 2016, and it’s a fascinating story. It’s also the only story worth taking a deep dive into if you want to understand the mechanics of presidential elections in the 21st century. But it’s not for the Morning Joe crowd.