In the little corner of the blogosphere that I read regularly, one of the recent hot topics has been viral news sites. I’m not quite sure why Upworthy and its brethren have suddenly become such an object of obsession (and scorn and envy), but they have. So what’s their secret?

Well, they’ve cracked the Facebook code, for one thing, and Facebook is the biggest traffic driver on the web these days. They spend a lot of time scouring the internet for content that people might find intriguing. They keep things simple. They concentrate mostly on videos.

Mostly, though, everyone agrees that they’ve perfected the science of irresistible headline writing. Upworthy is dedicated to promoting progressive narratives, for example, and one of their typical current offerings is a video that’s teased by this headline: “A Surprisingly Simple Way To Know Which Companies Are Cool And Which Are Sorta ‘Meh’.”

Awesome! But it’s also a lie. It’s a video about Wagemark, a foundation that wants every company to maintain an 8:1 ratio between its highest- and lowest-paid employees. It’s a worthy, progressive topic, I suppose, but certainly not a way to tell if a company is 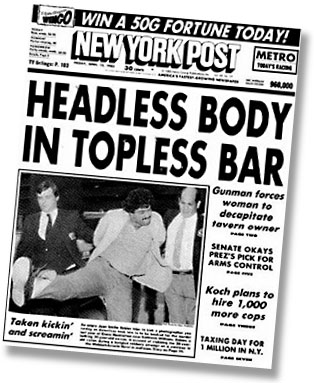 cool or not. Nor is it very interesting. A headline that told the truth about the video probably would have gotten a couple hundred pageviews.

Upworthy’s headline-writing black magic has become endlessly talked about as the apotheosis of our modern, millennial, warp-speed, social-media-driven culture. But you know what it reminds me of? Supermarket tabloids.

The supermarket tabs aren’t what they used to be, but back in their heyday this was their meat and drink. Every issue featured half a dozen titillating headlines on the cover that sucked you into a story on page 24 that was….usually kind of meh. They did their best to hide this, of course, but most of the time their headlines turned out to be come-ons that ultimately ended in disappointment. Still, you never knew if the next one might be the real deal. Hope springs eternal, so you kept coming back for more.

So will it keep working? Or will people eventually catch on to the scam? Both, of course. People will get bored with Upworthy and BuzzFeed one of these days, but a new generation will glom onto whatever the next slick purveyor of teasers turns out to be. This is not something new. In fact, it’s the oldest profession in the world. Only the details change from century to century.