Megan McArdle writes today about the fact that in some states, health coverage purchased via Obamacare allows you access to only a limited number of doctors and hospitals:

Come January, when some number of Americans have bought insurance on the new health exchanges and are starting to use the services, you can expect another controversy to arise when many of them find out just how few doctors and hospitals they have access to. Call it “doc shock,” though the biggest outcry will not come when people try to schedule an appointment with their physician, but when someone gets sick and they learn they cannot go to whatever top-notch hospital they want, only to the hospital that is included in their plan

….Even if it were true that we could get better treatment at a lower cost by restricting peoples’ choices, people would still hate having their choices restricted….If narrow networks could give everyone in the country access to health-care outcomes no worse than 90 percent as good as the folks with the best doctors at 75 percent of the price we’d pay for broader networks, the health-care wonks would jump on that deal as an unbelievable bargain. But I think it’s pretty clear that average folks don’t think like health-care wonks.

I’ve been referring to this as “network shock,” and I think it’s a real issue. Depending on just how narrow some of these networks are, there’s a potential for some substantial dissatisfaction from consumers.

At the same time, I want to push back against this notion that everyone hates restrictions and won’t tolerate them even if it saves them money. For many decades, companies offered employees a choice of health care plans. Unrestricted plans cost more and had higher copays. PPOs limited your choices, but had lower copays.

So how have people responded to this? They voted with their wallets and chose restricted plans. Since 1998, the number of people covered by PPOs has risen from 11 percent to 57 percent. If you combine every type of restricted plan—PPO, HMO, POS, etc.—their combined 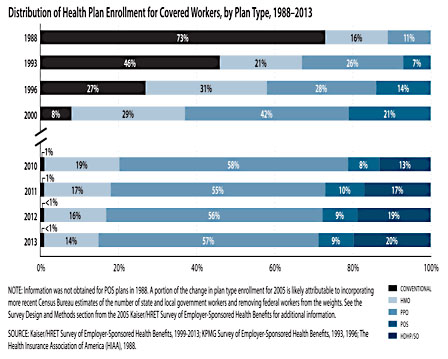 market share is 99 percent. Old-school plans that allow you to choose any doctor you want were already dying a decade ago, and today they’re all but extinct.

It’s possible that in some states, plan restrictions are going to be tight enough to cause some serious pushback. But the truth is that consumers do think like health care wonks—if by that you mean that they expect to make tradeoffs between price and service. If you go on the exchange and choose a low-cost plan, you’ll probably end up with a narrow network. If you pay more, you’ll get a wider network. American consumers are well accustomed to this. Most of us have been making decisions like this for a very long time.