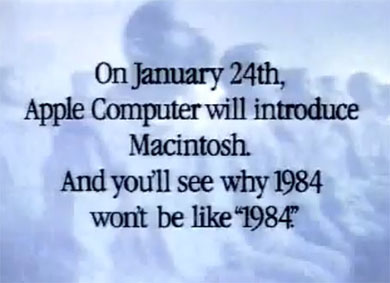 Thirty years ago this week, the Super Bowl featured an ad (directed by Ridley Scott, no less) for the soon-to-be-released Macintosh computer, in which Apple implicitly compared the dominance of Microsoft operating systems and IBM computers to the oppressive dictatorship of George Orwell’s 1984. Apple’s Board of Directors apparently hated the ad, but Steve Jobs insisted that it air, probably because he understood how critical it was to building Apple into not just an identifiable brand but a statement of personal identity. If you use a PC, Jobs was saying, you’re a drone, a cog in the wheel, someone who has been stripped of your individuality as you labor for the Man. Whereas if you use a Mac, you’re a creative, youthful individual forging your own way in the world and subverting the dominant paradigm.

Waldman uses this as a springboard for some thoughts about technology and privacy, but I want to hijack his post to make a more mundane point. Apple’s 1984 ad is justly famous, but everyone seems to be afraid to make the most obvious point about it: It didn’t work. Apple’s board of directors was probably right.

As a piece of art, the 1984 ad was tremendously successful, quickly turning into a cultural touchstone that generated mountains of free publicity for Apple. But that very success almost certainly helped doom the Macintosh, which became irrevocably viewed as a chi chi niche product for bohemians and graphic arts folks. The 1984 ad told everyone in unmistakable tones that the Mac wasn’t intended for business use; wasn’t intended for normal people; and wasn’t intended for getting any real work done. Sure, it may have appealed to creative, youthful individuals, but it cost the equivalent of $5,000 in today’s dollars. Creative, youthful individuals couldn’t afford to buy the damn thing—and the people who could afford it weren’t much interested after being pointedly ridiculed as drones and dullards.

Aside from all its other problems, Apple never overcame that. The Macintosh never held more than a tiny share of the PC market, and Apple’s revival in the aughts never owed anything to the Mac. Its success in the Jobs 2.0 era was based on the iPod, the iPhone, and the iPad. Those were genius.

The moral of the story is simple: Yes, the 1984 ad created an indelible brand image. But it was the wrong image. It was a memorable ad, but it wasn’t a good one.

And if that’s not enough to change your mind, here’s one more thing: 1984 also ushered in the era of insufferable “event” ads saturating the Super Bowl. That alone should be reason enough to consign it to the fiery depths of hell.