Congressional negotiators have agreed on a budget for FY2014, and for the most part it’s anticlimactic: the spending outlines were agreed to last year, so all this does is fill in some of the details. However, there’s always room for a few partisan hobbyhorses to make their way into the fine print. For example:

The agreement is riddled with dozens of controversial policy riders. One would bar funding to enforce a law that requires incandescent light bulbs to meet new efficiency standards.

How much difference would this actually make? Hard to say. On the one hand, the lighting industry has completed the transition to newer, more efficient bulbs and has no interest in going back. What’s more, these newer bulbs provide just about all the options anyone could ask for. Newer CFLs turn on quickly and don’t flicker. LED bulbs last forever. (Supposedly.) And ordinary incandescent bulbs continue to be available in more efficient halogen formulations for those who just don’t want to make the switch. Yes, you read that right: despite all the screaming about the heavy jackboot of the government, incandescent 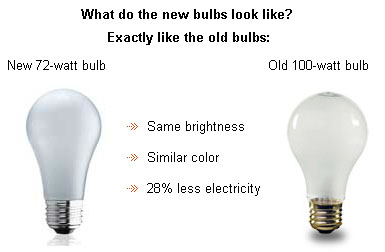 bulbs are still available right alongside the newer bulbs. All told, the transition is pretty much complete, so at this point there isn’t much to enforce anyway.

On the other hand, it’s also true that old-style incandescents provide a yellower light and are cheaper to buy than the newer halogens.1 So if the new standards aren’t enforced, there will certainly be a market for old-school bulbs. I suspect that big outlets like Lowes or Home Depot will stay away from them regardless, but smaller stores and internet suppliers will probably stock them for as long as anyone manufactures them.

Bottom line: At this point, suspending enforcement is mostly a symbolic gesture to please the tea party base of the GOP. It will have a modest effect, but for the most part the market has moved on. The 2007 law that phased out old-style incandescents ushered in a technological race to build a better bulb, and it worked. Those bulbs are here to stay.

1When you factor in the fact that halogens last twice as long and have lower power consumption than old-style incandescents, they’re actually cheaper over the lifespan of the bulb. However, there will always be a market for a product that costs less at the point of sale.