In his newly published memoir, former Defense Secretary Robert Gates describes a 2011 meeting about Afghanistan: “As I sat there, I thought: The president doesn’t trust his commander, can’t stand Karzai, doesn’t believe in his own strategy and doesn’t consider the war to be his. For him, it’s 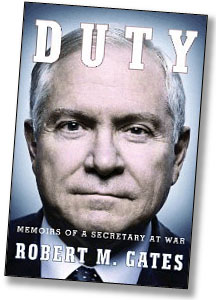 all about getting out.” Andrew Sullivan points me to Rod Dreher, whose pithy reaction seems like the right one:

Is it just me, or is this nuts? Obama’s judgment of the sleazy Karzai was correct, Obama knew the war was unwinnable, Gates thinks Obama made the right calls — but he faults the president for not being a True Believer? As if George W. Bush’s unwillingness to reassess American strategy in light of cold, hard experience is a sign of wisdom and character! I suppose Gates has a point if he’s faulting Obama for pursuing a military strategy that he (the president) didn’t believe in, but does Gates believe that an immediate withdrawal from Afghanistan would have been the better strategy, even if it had been politically feasible (which it may not have been)?

Based on the excerpts we’ve seen, this seems like the right response. Over and over, Gates seems to suggest that Obama made the right decisions and made them in the right way. And yet, he remained uneasy because Obama’s attitude toward the military wasn’t as deferential as he thought it should be. It’s easy to understand why a guy with Gates’ background might feel that way, but honestly, after over a decade of mostly fruitless war does Gates truly think that deference was in order? The truth is that Obama and his staffers should have been extremely skeptical of the military’s judgment by 2011. Nobody in the Pentagon wants to hear this, but by that time they had failed enough times that skepticism was really the only reasonable response from a new president.

It’s interesting to see how this book is being handled by different people. Obviously Gates has some criticisms of Obama, and every review notes that. However, he also had some very positive things to say about Obama, and most of the reviews are fairly evenhanded about pointing that out. Not so for Bob Woodward, though, whose front-page review in the Washington Post is so unremittingly negative that you’d think Gates’ book was little more than a 600-page hatchet job against Obama. Once again, I find myself wondering what’s up with Woodward. He obviously has a fairly intense loathing for Obama, but I can’t really figure out why.

Also interesting is Andrew Sprung’s comparison of Gates’ mid-90s memoir to this one. Gates has obviously changed a lot:

Gates 1996 and Gates 2014 are rather like America 1996 and America 2014. The first, ebullient, a tad triumphal, serenely confident that U.S. policymaking will be driven by countervailing democratic pressures both to express the will of the people and to secure order in the world as well as national security. The second, embittered, exhausted, fearful that the country has lost its capacity for problem-solving.

The whole post is worth a read. It’s obvious that Gates doesn’t much like what’s happened to America over the past decade, both politically and militarily. It’s hard to blame him for that.