A while back I mentioned Thomas Piketty’s new book, Capital in the 21st Century, which hasn’t yet made a big splash in the United States because the English translation won’t be out until March. But Thomas Edsall takes a look at reaction so far to Piketty’s thesis about the roots of rising income inequality and summarizes it this way:

Piketty proposes [] that the rise in inequality reflects markets working precisely as they should: “This has nothing to do with a market imperfection: the more perfect the capital market, the higher” the rate of return on capital is in comparison to the rate of growth of the economy. The higher this ratio is, the greater inequality is.

….There are a number of key arguments in Piketty’s book. One is that the six-decade period of growing equality in western nations — starting roughly with the onset of World War I and extending into the early 1970s — was unique and highly unlikely to be repeated. That period, Piketty suggests, represented an exception to the more deeply rooted pattern of growing inequality.

The chart on the right shows this graphically. For most of history, returns to capital were higher than the growth rate of the global economy, and this meant higher returns to owners of capital than to workers at large. And this means rising inequality. As a reviewer writes, “if capital incomes are more concentrated than incomes from 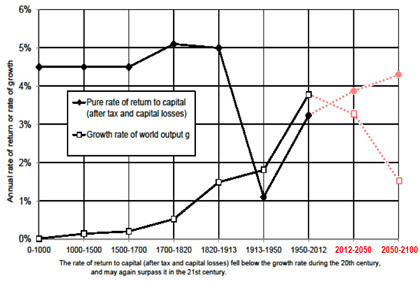 labor (a rather uncontroversial fact), personal income distribution will also get more unequal — which indeed is what we have witnessed in the past 30 years.” The mid-20th century reversal of this trend was temporary and unlikely to be repeated.

One thing to be clear about, however, is that the right side of Piketty’s chart is a forecast. I’ve redrawn it with dashed red lines to make that clear. Piketty is predicting that returns to capital will exceed growth modestly over the next half century, and will gap out wildly in the half century after that. Edsall doesn’t really explain why Piketty believes this, so I guess we’ll have to wait for further reviews on that score. Speaking for myself, I’ll need some convincing. My view is that the second half of the 21st century—assuming we manage not to blow each other up or fry the planet to a cinder—is likely to be an era of fantastically high growth thanks to robotics and artificial intelligence. That also produces problems related to the distribution of income, but they’re rather different from Piketty’s.

But in one sense it doesn’t matter. Piketty’s solution to the problem of this mismatch between growth and capital returns—which he considers an inevitable consequence of capitalism—is redistribution and plenty of it: “The only way to halt this process, he argues, is to impose a global progressive tax on wealth….an annual graduated tax on stocks and bonds, property and other assets that are customarily not taxed until they are sold.” That’s probably the eventual answer to the robotics revolution too. So regardless of which fork we take in the future, higher taxes on the rich seem pretty likely.