On Tuesday, President Obama proposed a “starter” retirement account for folks who don’t have IRAs or 401(k)s. Like a lot of people, I was pretty unimpressed. Today, Matt Bruenig reminds us of another reason to be unimpressed: we 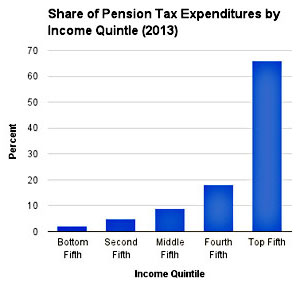 already spend a helluva lot of money on tax-favored retirement accounts, and nearly all of the benefit goes to the well off:

The richest fifth pulled down 66 percent of them, while the poorest fifth pulled down just 2 percent of them….Needless to say, this system of retirement tax subsidies is totally ridiculous and is just another of the submerged ways that we funnel huge sums of money to the rich in this country. If we really want to pump up the retirement savings of the poor, one obvious way to start is to take the next decade’s $1.4 trillion of retirement tax expenditures and distribute them in a different way than the manner detailed in the graph above.

And what might that “different way” be? Unlike Atrios, I’m not yet convinced that it’s fair to describe the 401(k) system as a “failure which offers some nice tax breaks to relatively wealthy people and hasn’t led to sufficient retirement savings for everybody else.” The thing is, the old-school pension system that we all profess to miss so much also benefited primarily the well off and also provided insufficient retirement savings for everyone else. And it was doomed anyway, thanks to increasing investment risk in the post-Bretton Woods era and lack of portability between jobs in an era when fewer and fewer people work for the same company their entire careers.

What’s more, I honestly don’t know if the current system is better or worse. I would love, love, love for someone to produce a reliable distributional estimate of defined-benefit pensions circa 1975 to defined-contribution pensions circa today.1 This would give us an idea of how much things have changed and who’s benefited the most from these changes. Unfortunately, no one seems to have done this. Maybe the data just isn’t there and it can’t be done. I don’t know. But at this point it’s all but impossible to say that our current DC pension system is really any worse than the old DB pension system.

That said, one thing is pretty easy to agree on: our pension system is, and always has been, miserly toward the poor. That’s true of Social Security; it’s true of old-school pensions; and it’s true of 401(k)s. If we want to reform our pension system, we should reform Social Security in a way that increases benefits for the folks at the bottom of the scale who are trying to scrounge a living on $1,100 a month. That probably means cutting benefit growth for those above the median, and it also means phasing in higher Social Security revenues over the next two or three decades. Unfortunately, although that would be the decent thing to do, it might mean that America’s best off have to pay slightly more in taxes by the time 2030 rolls around. And we can’t have that, can we?

LINGO DIGRESSION: “Defined benefit” refers to an old-school pension. Those are the ones where your monthly retirement benefit was guaranteed regardless of how much you contributed to it. “Defined contribution” is what most of us have now. We make specific contributions to personal accounts, and the payout during retirement depends on how well our investments do.