Over at the newly launched—or relaunched—FiveThirtyEight.com, Ben Casselman updates us on the enormous mountains of cash that have been piling up in company treasuries ever since the recession ended:

One of the early narratives of the economic recovery was that companies were “hoarding” cash….The data backed up the story: The Federal Reserve in 2011 reported that American companies had more than $2 trillion stashed away in overflowing vaults.

Then the Fed revised its data. New figures released in early 2012, based on more complete tax filings, showed that American companies actually had close to half a trillion dollars less cash than previously thought….The revision didn’t just change the numbers—it undermined the whole narrative.

….It’s understandable that so many experts bought into the “cash on the sidelines” narrative. What’s less understandable is that they’re still buying into it. Despite the big revision, the corporate-cash narrative remains very much alive.

Hmmm. I think there’s a little more to it. It’s true that two years ago the Fed revised down its corporate cash estimate for the first quarter of 2012 from $2.2 trillion to $1.7 trillion.1 But even taking that into account, corporations have been increasing their cash holdings about 15 percent per year since 2008. In 2013 corporate cash increased another 12 percent. That’s a pretty steep increase.

Beyond that, David Cay Johnston estimates that when you count cash worldwide, not just domestically, American corporations are holding something like $7.9 trillion in liquid assets. He calculates that this number has grown six times faster than corporate 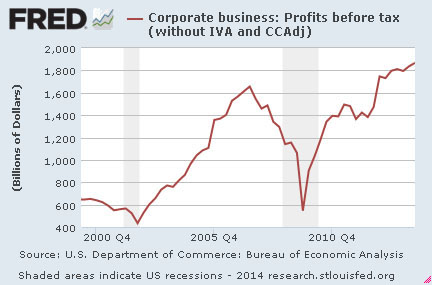 revenues since 1994. “When liquid assets grow six times faster than revenues, it tells you that companies are hoarding cash, not investing or spending.”

Now, it’s true that the huge spike initially reported in 2011-12 was mostly illusory. But it’s not clear to me that this undermines the entire “cash hoarding” narrative. Even without that spike, corporate cash holdings have been growing strongly over the past decade. What’s more, corporate profits have been booming ever since the recession ended—without a correspondingly dramatic increase in capital expenditures.

There are plenty of other arguments floating around. If you remove the tech sector, the whole phenomenon looks less dramatic. Corporate debt has been increasing too thanks to ultra-low interest rates, which suggests that companies are simply making a rational decision to borrow rather than spend their own cash. Cash overseas is piling up because companies don’t want to repatriate it and pay the taxes that would be due. Etc.

In other words, it’s complicated. I think Casselman has a point that the Fed’s revision wasn’t very widely reported or acknowledged, but I’m not sure that’s quite as damning as he suggests. The corporate cash pile-up, though less startling than we thought in 2012, is still real. Probably.

1Actually, this is an estimate of “liquid assets.” We’re just using cash here as shorthand.