Dominic Casciani of the BBC has a good piece up today about the hypothesis linking lead exposure in small children to violent crime rates later in life. Here’s my favorite part:

So why isn’t this theory universally accepted?

Well, it remains a theory because nobody could ever deliberately poison thousands of children to see whether they became criminals later in life. Lead theorists says that doesn’t matter because the big problem is mainstream criminologists and policymakers who can’t think outside the box.

But Roger Matthews, professor of criminology at the University of Kent, rejects that. He says biological criminologists completely miss the point. “I don’t see the link,” he says. “If this causes some sort of effect, why should those effects be criminal?

“The things that push people into crime are very different kinds of phenomena, not in the nature of their brain tissue. The problem about the theory is that a lot of these [researchers] are not remotely interested or cued into the kinds of things in the mainstream.

“There has been a long history of people trying to link biology to crime — that some people have their eyes too close together, or an extra chromosome, or whatever. This stuff gets 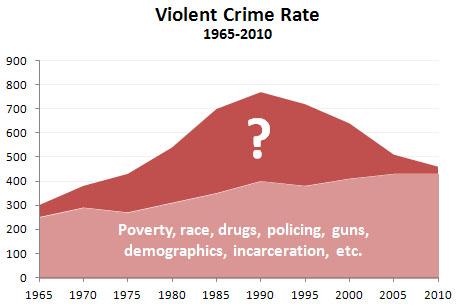 disproved and disproved. But it keeps popping up. It’s like a bad penny.”

If Matthews didn’t exist, someone would have to invent him. He plays the role of closed-minded scientist to perfection here. He obviously hasn’t read any of the literature about lead and crime; doesn’t care about the evidence; and is interested only in sociological explanations of crime because he’s ideologically committed to a particular sociological school of criminology. Beyond that, he apparently figures that because phrenology got debunked a century ago, there’s no real point in reading up on anything more recent in the field of neuroscience. All this despite the fact that mainstream criminology is famously unable to reasonably account for either the epic crime wave of the 60s through the 80s or the equally epic decline since then.

In any case, if anyone really wants to know why the lead theory isn’t universally accepted, the answer is easy: it’s not universally accepted because it’s new and unproven. Nor does it pretend to be a monocausal explanation for all crime. However, there’s pretty good reason to think that neurology might indeed mediate violent behavior, and there’s pretty good reason to think that massive postwar exposure to lead may have been a very particular neurological agent mediating a large rise in violent crime starting in the mid-60s. The evidence isn’t bulletproof, but it’s pretty strong. It deserves more than cavalier dismissal.