Vikram Bath takes on the cult of Finland today. What’s that? You didn’t realize Finland had a cult? Well, it does in the education community, where Finland’s consistently high scores on the international PISA test make it the go-to destination 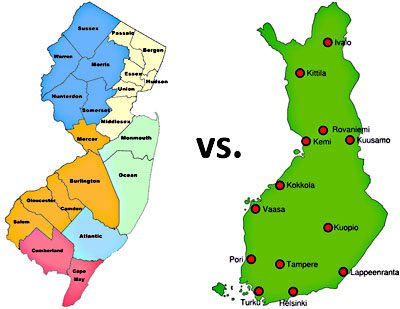 for education writers looking for agreeable junkets they can turn into long-form thumbsuckers about how American schools are doing everything wrong.

But Bath points out that Finland isn’t actually the world’s top performer on the PISA test. Shanghai does better. So does Hong Kong. Now, maybe those are cherry-picked examples that owe their success to government authorities who game the tests, and therefore deserve to be ignored. But Japan does better too. And South Korea. And Taiwan. So why have they fallen out of vogue lately in the popular press? Why do we hear endless tributes to Finland instead? Bath suggests the reason we like Finland is fairly obvious:

“Be like Shanghai” is for the Wall Street Journal crowd. Shanghai is rote memorization and beating your kids and no bathroom breaks and pretending you aren’t numbed by classical music. Finland is culture and castles and liking classical music because you’d be a better person and maybe windmills.

Fine. Asian countries are culturally different. Maybe it makes sense to look instead at countries that are more similar to America. The problem is, Finland isn’t really much like America either. It’s ethnically pretty homogeneous and has extremely low rates of poverty. Obviously tackling poverty would be great, but facts are facts: we’re not likely to reduce our poverty rate to 3 percent anytime soon. So does that mean we’re stuck with no place to aspire to at all?

No. There is still a much, much better non-Asian model. It’s Massachusetts.

14% of children in Massachusetts live in relative poverty. That’s still below the US average, but much more American-like than Finland.

Unlike Finland, Massachusetts has already figured out how to deal with all the existing regulations imposed by the US government.

Unlike Finland, Massachusetts has figured out how to cooperate productively with US teachers unions.

Unlike Finland, Massachusetts has demonstrated how to get results from US-trained teachers rather than masters holders from Finnish research schools, of which the world only has so many.

Unlike Finland, Massachusetts has experienced success teaching real American students who go home every day to be subjected to American parenting styles.

Nevertheless, Bath’s point is well taken. But you might want to choose a different state: New Jersey, which has a high composite score not because it’s mostly white (it’s about 60 percent white), but because it does an outstanding job of teaching kids of all colors. Judging by NAEP scores, it ranks among the top four states in both math and reading for whites, blacks, and Hispanics.

Of course, New Jersey’s poverty rate is pretty low, and we know that poverty is a prime cause of poor educational outcomes. This helps account for New Jersey’s high scores, and also acts as an object lesson in not fetishizing particular countries, states, or programs. This stuff is complicated, and there’s no point in just substituting one simplistic analysis for another. That said, I’d say Bath is worth listening to. We should take good ideas from wherever we can find them, but there’s not much reason to go haring around the world looking for educational lodestars to emulate. We have 51 laboratories of democracy right here at home, all of which are more culturally similar to each other than any foreign country is. And some of them do pretty well, already working within the framework of American culture, American laws, American ethnic makeup, and American parents. Why not study them instead?