Via Counterparties, a new study suggests that we now have a “superordinate” working class: highly paid professionals who are so dedicated to their professions that they’d rather work in the office than engage in leisure or vacation time:

The best educated men used once to work much shorter hours for pay, an echo, still in the 1960s, of the end-of-19th century leisure-class ideology. But by the beginning of the 21st century they are working the longest hours in their exchange-economy jobs. And the best-educated women in each of the regime types, show an even more decisive differential movement into paid work.

Now add these trends together and we see, unambiguously, the 21st century reversed education/leisure gradient, with the best educated, both men and women, working, overall, a much larger part of the day than the medium-level educated, who in turn do more than the lowest educated. At least from the 1970s onwards, we see no decisive decline in overall work time, perhaps the slightly the reverse, with a small historical increase, particularly for the best educated, in the range 530 to 550 minutes per day. Industrious activities are transferred out of the money economy, and, replacing the 19th century leisure class, we find a 21st century superordinate working class. 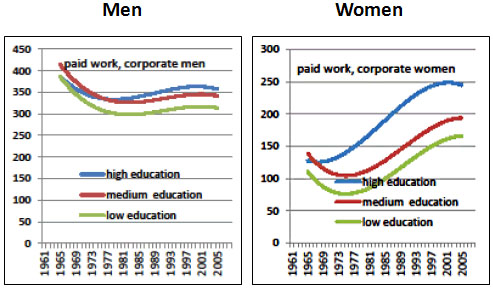 The basic evidence is on the right. I guess I find it only modestly convincing. In 1961, highly educated men in the corporate world worked similar hours to their less-educated peers. By 2005, they were working a bit more, but their total work hours were actually down from their peak. Conversely, although it’s true that highly educated women have very plainly outpaced the working hours of their less-educated peers, this is hardly surprising given the immense change in opportunities allowed to women since 1961, as well as the vastly higher pay that well-educated women can now expect in the corporate world.

So yes: highly-educated professionals are working more than they used to. Are they working themselves into a new, 21st-century frenzy, though? The evidence for that seems fairly modest. The big story here seems to be a more prosaic one: women are basically catching up to men, which hardly comes as a surprise. Beyond that, though, the evidence for a rising Veblenesque warrior class that views long hours as a status symbol strikes me as weak. Obviously it exists in places like Wall Street and Silicon Valley, but I suspect that its broader impact is fairly limited.