I’m a little reluctant to dive ever deeper into the weeds of Thomas Piketty’s Capital in the 21st Century since I’m woefully unqualified for the task. But I have a couple of follow-up comments that might be worthwhile. These are things I alluded to in my post on Tuesday but didn’t elaborate on.

First: As you know by now, Piketty’s primary argument is that, historically, r > g. That is, the return on capital is higher than economic growth, which means that owners of capital see their incomes grow faster than ordinary laborers. Since 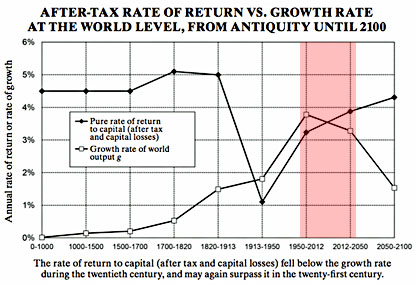 the rich own most of the capital, this means that the incomes of the rich naturally increase faster than the non-rich unless proactive steps are taken to stop it.

That’s fine. But take a look at the highlighted region in the chart on the right. The first set of points is for 1950-2012, a period in which r was about 0.5 percentage points less than g. The next set of points is a projection for 2012-2050, a period in which r is roughly 0.5 percentage points greater than g. This is not a big difference, especially considering the inherent noise in the data. Even if it’s correct, it means the next 40 years will see only small changes in the relative returns to capital and labor.

The real action is in the period 2050-2100, and it’s almost entirely dependent on Piketty’s projection that g will plummet by two full percentage points. Now, this might be correct. But keep in mind what’s going on here. Piketty’s main conclusion is (a) based on a projection more than 50 years in the future, which is inherently unreliable, and (b) primarily a guess that economic growth will plummet. So everything boils down to this: will global economic growth plummet during the period 2050-2100? I’d like to suggest that this is a very different question from the one most people are addressing in their reviews of Piketty.

Second: Another thing I mentioned on Tuesday is that if economic growth slows and capital stocks increase, then the return on capital should go down. Piketty acknowledges this—though not in the chart above—but contends that r will fall less than g. In technical terms, this all depends on the elasticity of substitution between capital and labor. However, over at Tyler Cowen’s blog, Matt Rognlie argues that Piketty is confusing gross and net production functions. If you account for depreciation, then the elasticity is such that r is likely to fall much faster than Piketty thinks as capital stocks increase and economic growth slows down.