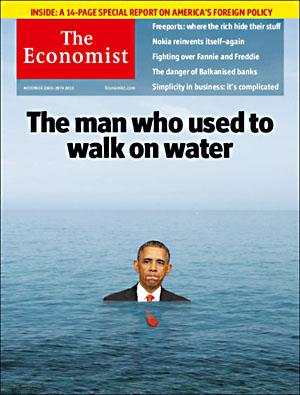 Thomas Frank is convinced that Barack Obama single-handedly prevented America from becoming the lefty paradise it was on course for after the financial meltdown of 2008:

The Obama team, as the president once announced to a delegation of investment bankers, was “the only thing between you and the pitchforks,” and in retrospect these words seem not only to have been a correct assessment of the situation at the moment but a credo for his entire term in office. For my money, they should be carved in stone over the entrance to his monument: Barack Obama as the one-man rescue squad for an economic order that had aroused the fury of the world. Better: Obama as the awesomely talented doctor who kept the corpse of a dead philosophy lumbering along despite it all.

….In point of fact, there were plenty of things Obama’s Democrats could have done that might have put the right out of business once and for all—for example, by responding more aggressively to the Great Recession or by pounding relentlessly on the theme of middle-class economic distress. Acknowledging this possibility, however, has always been difficult for consensus-minded Democrats, and I suspect that in the official recounting of the Obama era, this troublesome possibility will disappear entirely. Instead, the terrifying Right-Wing Other will be cast in bronze at twice life-size, and made the excuse for the Administration’s every last failure of nerve, imagination and foresight. Demonizing the right will also allow the Obama legacy team to present his two electoral victories as ends in themselves, since they kept the White House out of the monster’s grasp—heroic triumphs that were truly worthy of the Nobel Peace Prize. (Which will be dusted off and prominently displayed.)

I see this kind of thing all the time on the right. If only we had a candidate who refused to sell out conservative values! A candidate who could truly make the American public understand! Then we’d win in a landslide!

It’s easy to recognize this as delusional. Tea party types are always convinced that America is thirsting for true conservatism, and all that’s needed is a latter-day Ronald Reagan to be its salesman. Needless to say, this misses the point that Americans aren’t all reactionaries. In fact, as the embarrassing clown shows of the past two GOP primaries have shown, even most Republicans aren’t reactionaries. There’s been no shortage of honest-to-God right wingers to choose from, but they can’t even win the nomination, let alone a general election.

But if it’s so easy to see this conservative delusion for what it is, why isn’t it equally easy to recognize the same brand of liberal delusion? Back in 2009, was Obama really the only thing that stood between bankers and the howling mob? Don’t be silly. Americans were barely even upset, let alone ready for revolution. Those pathetic demonstrations outside the headquarters of AIG were about a hundredth the size that even a half-ass political organization can muster for a routine anti-abortion rally. After a few days the AIG protestors got bored and went home without so much as throwing a few bottles at cops. Even the Greeks managed that much.

Why were Americans so obviously not enraged? Because—duh—the hated neoliberal system worked. We didn’t have a second Great Depression. The Fed intervened, the banking system was saved, and a stimulus bill was passed. Did bankers get treated too well? Oh yes indeed. Was the stimulus too small? You bet. Nevertheless, was America saved from an epic collapse? It sure was. Instead of a massive meltdown, we got a really bad recession and a weak recovery, and even that was cushioned by a safety net that, although inadequate, was more than enough to keep the pitchforks off the streets.

As for Obama, could he have done more? I suppose he probably could have, but it’s a close call. Even with his earnest efforts at bipartisanship at the beginning of his presidency, he only barely passed any stimulus at all. If instead he’d issued thundering populist manifestos, even Susan Collins would have turned against him and the stimulus bill would have been not too small, but completely dead. Ditto for virtually everything else Obama managed to pass by one or two votes during his first 18 months. If that had happened, the economy would have done even worse, and if you somehow think this means the public would have become more sympathetic to the party in the White House, then your knowledge of American politics is at about the kindergarten level. Democrats would have lost even more seats in 2010 than they did.

Look: Obama made some mistakes. He should have done more about housing. He shouldn’t have pivoted to deficit-mongering so quickly. Maybe he could have kept a public option in Obamacare if he’d fought harder for it. Maybe, maybe, maybe. But probably not. Like it or not, America was not poised for a huge liberal wave in 2008. It just wasn’t. It was poised for a fairly routine cycle of throwing out the old bums and electing new bums, who would, as usual, be given a very short and very limited honeymoon. Democrats actually accomplished a fair amount during that honeymoon, but no, they didn’t turn American into a lefty paradise. That was never in the cards.

All of us who do what Thomas Frank does—what I do—have failed. Our goal was to persuade the public to move in a liberal direction, and that didn’t happen. In the end, we didn’t persuade much of anyone. It’s natural to want to avoid facing that humiliating truth, and equally natural to look for someone else to blame instead. That’s human nature. So fine. Blame Obama if it makes you feel better. That’s what we elect presidents for: to take the blame.

But he only deserves his share. The rest of us, who were unable to take advantage of an epic financial collapse to get the public firmly in favor of pitchforks and universal health care, deserve most of it. The mirror doesn’t lie.