There’s no question that the statutory text of Obamacare contains a mistake. In one of its sections, it authorizes federal subsidies only for taxpayers who enroll through a state-based exchange, not for those who enroll through the federal 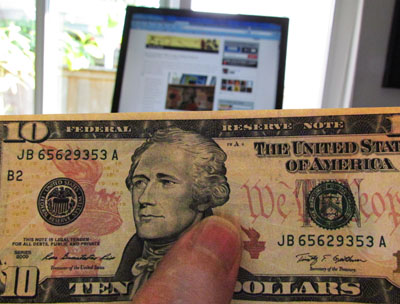 exchange. But was it really a mistake? Brian Beutler comments:

Right-wing activists have spent the last several months fabricating a rival narrative—a ludicrous theory of intent, in which leading Democrats meant to condition the subsidies, but decided to keep the inducement a secret from reporters, back bench members, governors, budget analysts, and health care reform advocates. This kind of deceptive argumentation is perhaps to be expected from activists. What’s become incredibly frustrating to me about the Halbig brouhaha in the last few days is watching the conservative health care writers who were in the same trenches watching the same debate unfold—attempting, from a very skeptical vantage point, to explain the bill correctly—suddenly turn around and vouchsafe the Halbig Truthers.

That suggests something to me. As far as I know, not a single reporter who covered the Obamacare battle believes that Congress intended to restrict subsidies to state exchanges. As Beutler says, “To the extent that the question wasn’t probed widely, if at all, it’s because that would’ve been almost like asking whether the subsidies were intended to be denominated in Rubles.” Sarah Kliff agrees: “It was never a question, during the five years I’ve spent writing about Obamacare, whether this would be case.” Nobody in Congress questioned the universality of subsidies. Nobody in the executive branch questioned it. No governors questioned it. None of the bureaucrats tasked with building the exchanges questioned it. And nobody in the press questioned it.

And that brings me to my suggestion: Is it really true that no one in the press questioned it? For the moment, let’s forget about liberals. Hell, everyone knows we’re in the bag for Obamacare, and by now we’ve probably scrubbed all our old posts of damning evidence. Ditto for the mainstream media. They’re just shills for Obama anyway. But how about conservatives? They covered the Obamacare battle pretty obsessively too. Here’s my guess: every single article written by conservatives between January 2009 and March 2010 (a) assumed that subsidies were universal and (b) never so much as mentioned the possibility that they weren’t. In other words, they all believed in universal subsidies too because there was never any reason in their reporting to believe otherwise. Not one single reason.

But maybe I’m wrong! So here’s my offer: I will send a crisp, new ten-dollar bill to anyone who can point out a conservative who so much as suspected that subsidies were limited to state exchanges prior to March 2010. Surely that’s incentive enough? Let’s start digging up evidence, people.