For more than a year, NSA officials have insisted that although Edward Snowden had access to reports about NSA surveillance, he didn’t have access to the actual surveillance intercepts themselves. It turns out they were lying.1 In fact, he provided the Washington Post with a cache of 22,000 intercept reports containing 160,000 individual intercepts. The Post has spent months reviewing these files and 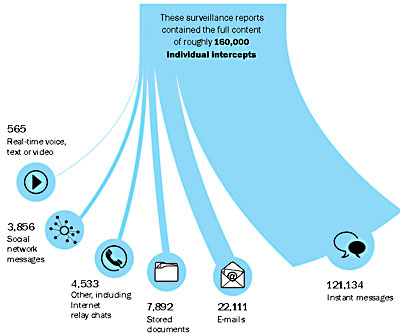 estimates that 11 percent of the intercepted accounts belonged to NSA targets and the remaining 89 percent were “incidental” collections from bystanders.

So was all of this worth it? The Post‘s review illustrates just how hard it is to make that judgment:

Among the most valuable contents—which The Post will not describe in detail, to avoid interfering with ongoing operations—are fresh revelations about a secret overseas nuclear project, double-dealing by an ostensible ally, a military calamity that befell an unfriendly power, and the identities of aggressive intruders into U.S. computer networks.

Months of tracking communications across more than 50 alias accounts, the files show, led directly to the 2011 capture in Abbottabad of Muhammad Tahir Shahzad, a Pakistan-based bomb builder, and Umar Patek, a suspect in a 2002 terrorist bombing on the Indonesian island of Bali. At the request of CIA officials, The Post is withholding other examples that officials said would compromise ongoing operations.

Many other files, described as useless by the analysts but nonetheless retained, have a startlingly intimate, even voyeuristic quality. They tell stories of love and heartbreak, illicit sexual liaisons, mental-health crises, political and religious conversions, financial anxieties and disappointed hopes. The daily lives of more than 10,000 account holders who were not targeted are catalogued and recorded nevertheless.

…If Snowden’s sample is representative, the population under scrutiny in the PRISM and Upstream programs is far larger than the government has suggested. In a June 26 “transparency report,” the Office of the Director of National Intelligence disclosed that 89,138 people were targets of last year’s collection under FISA Section 702. At the 9-to-1 ratio of incidental collection in Snowden’s sample, the office’s figure would correspond to nearly 900,000 accounts, targeted or not, under surveillance.

The whole story is worth a read in order to get a more detailed description of what these intercepts looked like and who they ended up targeting. In some ways, the Snowden intercepts show that the NSA is fairly fastidious about minimizing data on US persons. In other ways, however, the NSA plainly stretches to the limit—and probably beyond—the rules for defining who is and isn’t a US person. Click the link for more.

1Naturally, the NSA has an explanation:

Robert S. Litt, the general counsel for the Office of the Director of National Intelligence, said in a prepared statement that Alexander and other officials were speaking only about “raw” intelligence, the term for intercepted content that has not yet been evaluated, stamped with classification markings or minimized to mask U.S. identities.

“We have talked about the very strict controls on raw traffic…” Litt said. “Nothing that you have given us indicates that Snowden was able to circumvent that in any way.”

Jesus. If someone in Congress isn’t seriously pissed off about this obvious evasion, they might as well just hang up their oversight spurs and disband.