Noam Scheiber has a piece in the current issue of the New Republic about Hillary Clinton’s imminent takeover of the Democratic Party, and today Ezra Klein interviewed him about it. Klein was especially interested in the argument that Obama’s 2008 supporters were so 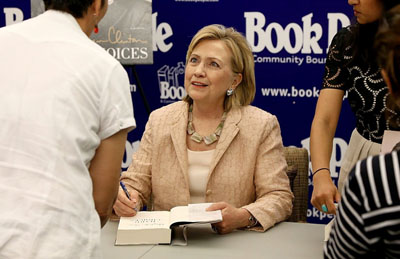 disillusioned by Obama’s failure to change Washington that they’re now eager to support an old-school politico like Hillary. Here’s Scheiber:

Back in 2008, Hillary Clinton made this kind of snide, but in retrospect apt, critique of Obama where she said that Obama thinks he’ll get to Washington and the heavens will part and the Republicans will cooperate, but that just won’t happen. So I asked some of these Obama supporters if she was right. And a lot of these people remembered those comments and being annoyed by them. But they all said she was actually a bit right. We were a bit naive then, they said. People used the word naive a lot in these conversations.

It just never occurred to me that anyone took this stuff seriously. It’s a presidential campaign! Of course he’s promising a chicken in every pot. That’s what presidential candidates do. I believed then, and still believe now, that Obama is basically a mainstream Democrat who’s cautious, pragmatic, technocratic, and incremental. In fact, that seemed so obvious to me that I never really credited the idea that anyone could seriously see him any differently.

Well, I guess that was naive on my part. By now, the evidence is clear that millions of Obama voters really believed all that boilerplate rhetoric. Naturally, then, they’re bitterly disappointed at the real-world Obama. Well, I’m disappointed in some ways too—mostly in the areas of foreign policy and national security—but I continue to think he’s a pretty good president because my expectations were tempered to begin with.

Nor do I think Hillary would have done any better. Probably worse, I’d say. After all, once he was in office, it’s not as if Obama acted like he believed his campaign-trail rhetoric. He hired a bunch of pretty ordinary staffers and got to work passing pretty ordinary legislation. Is the theory here that Hillary would have figured out some magical points of leverage that Obama didn’t? That she would have done better because Republicans like her more than Obama? Please.

I have pretty mixed feelings about a Hillary Clinton candidacy. On the one hand, I’ve long admired her obviously sincere dedication to public service in the face of abuse that would destroy a weaker person. On the other hand, another Clinton? This is no fault of hers, but I’m not sure I’m any more excited about that than I am about the prospect of another Bush. Maybe it’s time to move on.

Either way, though, I sure hope all those folks who are disappointed by Obama don’t think that Hillary is some sort of silver bullet either. If she runs and wins, she’ll be dealing with exactly the same kind of Republican obstructionism as Obama—and she’ll have just as much trouble getting anything done.

If disappointed Dems really want to change things, they have only one option: figure out a way to take back Congress in 2016. That’s it. Until and unless that happens, George Washington himself wouldn’t be any more effective than Obama has been.