Today brings a remarkable column from the Washington Post’s Chris Cillizza. It’s about the Clinton family’s adversarial relationship with the press:

Put simply: Neither Hillary nor Bill Clinton likes the media or, increasingly, sees any positive use for them.

“If a policymaker is a political leader and is covered primarily by the political press, there is a craving that borders on addictive to have a storyline,” Bill Clinton said in a speech at Georgetown University back in April. “And then once people settle on the storyline, there is a craving that borders on blindness to shoehorn every fact, every development, every thing that happens into the story line, even if it’s not the story.”

That’s an interesting comment from Bill Clinton. Is it true? Well, check this out from the start of Cillizza’s column:

Amy Chozick is the reporter tasked with covering the Clintons — and the runup to the now-almost-inevitable Hillary Clinton presidential bid — for the New York Times. Sounds like a plum gig, right? Until, that is, a press aide for the Clinton Global Initiative follows you into the bathroom.

Chozick describes a “friendly 20-something press aide who the Clinton Global Initiative tasked with escorting me to the restroom,” adding: “She waited outside the stall in the ladies’ room at the Sheraton Hotel, where the conference is held each year.”

Yes, this may be an extreme example. And, yes, the press strictures at the Clinton Global Initiative are the stuff of legend. But, the episode also reflects the dark and, frankly, paranoid view the Clintons have toward the national media. Put simply: Neither Hillary nor 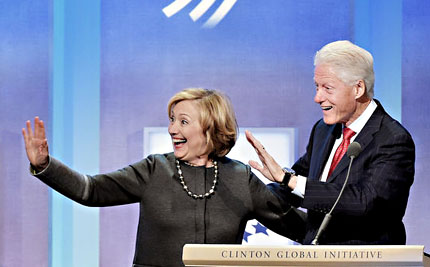 Bill Clinton likes the media or, increasingly, sees any positive use for them.

Here’s what makes this fascinating. If you click the link and read Chozick’s piece, you’ll learn that every reporter at the CGI is “cloistered in a basement at the Sheraton” and that an escort is required wherever they go, “lest one of us with our yellow press badges wind up somewhere where attendants with an esteemed blue badge are milling around.” It’s entirely fair to argue that this is absurdly restrictive. It’s not fair to imply that this is special treatment that Chozick got because she’s the beat reporter covering the Clintons. Every other reporter at the event got the same treatment.

But that’s what Cillizza did. In other words, he had already settled on a storyline, so he shoehorned the Chozick anecdote into his column to support that storyline. Which was exactly Clinton’s complaint in the first place.

Don’t get me wrong. I don’t actually have any doubt that the Clintons do, in fact, have a pretty tortured relationship with the press. After the way the press treated them in the 90s, it would be remarkable if they didn’t. It might even be “dark and paranoid.” That wouldn’t surprise me too much either.

Nonetheless, I wish Cillizza would at least try to analyze his own tribe’s behavior with the same care that he analyzes the Clintons’. In any fair reading, the press has legitimate grievances about its treatment by the Clintons, but the Clintons have some legitimate grievances about the obsessive shiny-toy-feeding-frenzy nature of modern political press coverage too. Unfortunately, all Cillizza manages to say about the hostile atmosphere of Hillary Clinton’s 2008 campaign is that reporters weren’t “entirely innocent in the whole thing.”

Nobody should take this as a defense of the Clintons. High-profile politicians have always gotten klieg-light treatment, and they have to be able to handle it. At the same time, there ought to be at least a few mainstream reporters who also recognize some of the pathologies on their own side—those specific to the Clintons as well as those that affect presidential candidates of all stripes. How about an honest appraisal—complete with biting anecdotes—of how the political press has evolved over the past few decades and how storyline reporting has poisoned practically everything they do?