Over the weekend, Elizabeth Rosenthal gave us the latest installment in her series of rage-inducing stories about the American health care system. Like all the others in the series, it was all but ignored by the rest of the world. I guess everyone was too busy panicking over the White House fence jumper or figuring out ways to one-up each other in their withering scorn for Roger Goodell.

Or, like me, they’ve just given up even hoping that anyone will ever do anything about it. Saturday’s installment was about a medical practice that infuriates me more than almost any other: the routine practice of creating artificial and insanely high “list prices” for procedures that bear no relation to reality and exist for only one reason: to occasionally take advantage of the people who are most vulnerable to abusive pricing. That includes the uninsured, who can least afford it, and those who are already on the gurney going into surgery, who are barely in any condition to fight back.

Rosenthal’s latest piece is about the increasingly common practice of calling in “assistants” during surgical procedures who aren’t covered by the patient’s insurance and are therefore not subject to rates negotiated with the insurance company. This allows them to charge as much as they feel like, and then to harass patients with bill collectors forever unless they pay up. Here’s a graphic that accompanied the article: 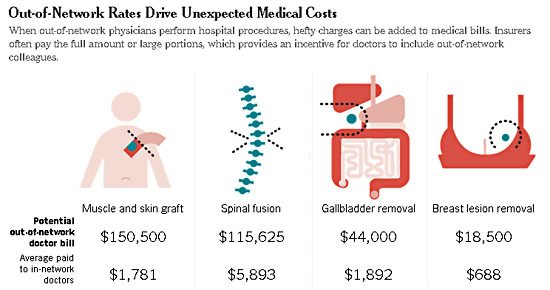 The stomach-turning part of this is that it’s so obvious what’s going on. Clearly, the muscle and skin graft in the first example can be done for about $2,000, which produces a decent income for the doctor. So what’s the reason for the list price topping $150,000? There isn’t one. It’s solely so doctors can scam the occasional patient and make a fast buck. As long as it’s not a Medicare or Medicaid procedure, and it’s out-of-network, there are no rules. So why not?

Are these assistants pals of the primary surgeon who get called in occasionally as a wink-wink-nudge-nudge buck-raking favor for a friend? Does it happen more randomly than that? Who knows. But there’s a limit to what patients can do. They’re in prep for surgery, there are tubes in their arms, and they get handed a bunch of papers to sign. Who knows what they say? Are they going to check? Are they going to read all the fine print? No and no, even if they’re aware that this kind of stuff can happen. Which most patients aren’t. A few weeks later they get the bill and their jaw drops to the floor. It’s the same thing that happens to uninsured patients who don’t have the benefit of insurer-negotiated rates when they land in the ER.

This is a scam, plain and simple. So why does it continue? Let’s allow James J. Donelon, the Republican insurance commissioner of Louisiana, to explain:

This has gotten really bad, and it’s wrong. But when you try to address it as a policy maker, you run into a hornet’s nest of financial interests.

And there you have it. It’s a great racket that allows doctors to extort loads of money from those in the most pain and with the least ability to fight back. None of them want the gravy train to end, and that’s your “financial interests” right there. It’s shameless and venal and there’s no excuse for it. And that’s America’s health care system.

In good conscience, I’m not even sure I can recommend that you read the whole piece. It will probably send your blood pressure skyrocketing and possibly send you to the ER, where you’ll be pauperized by the very practice the article is about. You have been warned.