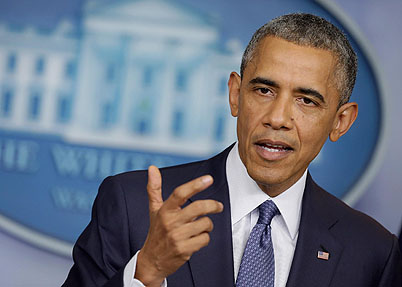 Over the weekend, Peter Baker wrote a story about President Obama’s cautious, calculated approach to the fight against ISIS. It is, Obama says, a reaction against the frenzied buildup to the Iraq War in 2002-03:

In his own way, Mr. Obama said, he had seen something similar, a virtual fever rising in Washington, pressuring him to send the armed forces after the Sunni radicals who had swept through Iraq and beheaded American journalists. He had told his staff, he said, not to evaluate their own policy based on external momentum. He would not rush to war. He would be deliberate.

“But I’m aware I pay a political price for that,” he said.

His introspection that afternoon reflected Mr. Obama’s journey from the candidate who wanted to wind down America’s overseas wars to the commander in chief who just resumed and expanded one….He alternated between resolve as he vowed to retaliate against President Bashar al-Assad if Syrian forces shot at American planes, and prickliness as he mocked critics of his more reticent approach to the exercise of American power.

“Oh, it’s a shame when you have a wan, diffident, professorial president with no foreign policy other than ‘don’t do stupid things,’ ” guests recalled him saying, sarcastically imitating his adversaries. “I do not make apologies for being careful in these areas, even if it doesn’t make for good theater.”

….This account of Mr. Obama’s thinking as he arrived at a pivotal point in his presidency is based on interviews with 10 people who spoke with him in the days leading up to his speech Wednesday night….The president invited a group of foreign policy experts and former government officials to dinner on Monday, and a separate group of columnists and magazine writers for a discussion on Wednesday afternoon.

What I’m curious about is why Obama is so intent on making this public. Obviously you don’t invite a bunch of columnists and reporters for a chat—off the record or otherwise—unless you intend for everyone in the world to hear what you said. In fact, this is a bit of theater in its own right, since a supposedly “private” meeting is bound to get more attention than a garden-variety interview.

So….why? Is it something of a sop to his base, trying to assure them that he’s not planning to let the current fight morph into Iraq War 2.0? Is it hubris, making sure everyone in the foreign policy community knows that he doesn’t care what they think? Is it a deliberate jab against the media and its complicity in ramping up war fever? Or does he truly think that the Beltway punditocracy will respond favorably to this kind of thing?

It’s all very strange. It’s obvious that Obama truly believes he’s being cautious and wants everyone to know that this is deliberate, not merely the ramblings of a tortured executive who can’t make up his mind. Perhaps he’s trying his best to normalize this kind of decisionmaking about war, since it’s basically unheard of in modern history. If that’s the case, then I wish him the best of luck.

And you know what? He might actually be having an effect. He might really be embarrassing a few people into facing up to their tacit assumption that the only kind of strong foreign policy is one that involves both liberal use of the military and plenty of Churchillian rhetoric to go along with it. Maybe he really is normalizing a more levelheaded approach to the world’s problems. That would certainly account for the almost insane gibbering we’ve been getting lately from folks like John McCain and Lindsey Graham, both of whom have apparently been driven mad at the thought that all-war-all-the-time might be losing its appeal as the default foreign policy of serious people. Who knows? Maybe a few serious people are even starting to see it for the folly that it actually is.