Yesterday I wrote a post noting that a supposedly war-weary public had suddenly become awfully war happy. “All it took,” I said, “was a carefully stagecrafted beheading video and the usual gang of conservative jingoists to exploit it.” Here’s a Twitter conversation that followed (lightly edited for clarity):

DS: Think of what you wrote: “All it took was…beheading”? I opposed W’s but this is what wars are made from & I think rightly so. 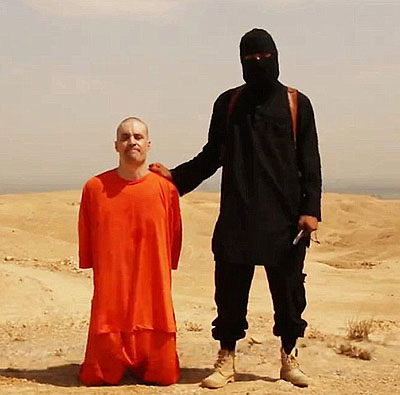 Me: Really? So any group anywhere in the world merely needs to commit an atrocity to draw us into war?

DS: On what other basis should wars be fought if not to stop groups from committing atrocities against Americans?

I’m not trying to pick on anyone in particular here, but it’s pretty discouraging that this kind of attitude is so common. There’s no question that the beheading of American citizens by a gang of vicious thugs is the kind of thing that makes your blood boil. Unless you hail from Vulcan, your gut reaction is that you want to find the barbarians who did this and crush them.

But that shouldn’t be your final reaction. This is not an era of conventional military forces with overwhelming power and no real fear of blowback. It’s an era of stateless terrorists whose ability to commit extremely public atrocities is pretty much unlimited. And while atrocities can have multiple motivations, one of the key reasons for otherwise pointless actions like one-off kidnappings and beheadings is their ability to either provoke overreactions or successfully extort ransoms. Unfortunately, Americans are stupidly addicted to the former and Europeans seem to be stupidly addicted to the latter, and that’s part of what keeps this stuff going.

In any case, a moment’s thought should convince you that we’re being manipulated. We’ve read account after account about ISIS and its remarkably sophisticated command and publicity apparatus. The beheading video is part of that. It’s a very calculated, very deliberate attempt to get us to respond stupidly. It’s not even a very subtle manipulation. It’s just an especially brutal one.

So if we’re smart, we won’t give them what they want. Instead we’ll respond coldly and meticulously. We’ll fight on our terms, not theirs. We’ll intervene if and only if the Iraqi government demonstrates that it can take the lead and hold the ground they take. We’ll forego magical thinking about counterinsurgencies. We won’t commit Western troops in force because we know from experience that this doesn’t work. We’ll avoid pitched battles and instead take advantage of our chances when they arise. Time is on our side.