Ryan Avent is unhappy that the Fed has basically declared the economy in good shape and ended its quantitative easing program. I’m inclined to agree with him, though I’ll grant that it’s a legitimately debatable point. But on 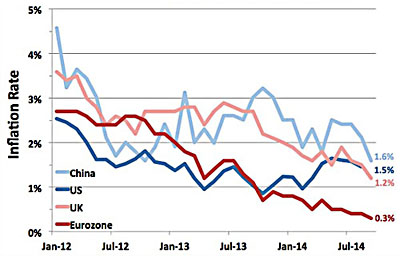 another point—the Fed’s prolonged inability to hit its own 2 percent inflation target—Avent is absolutely spot on:

….We can debate whether the Fed has the right target or not….Do you know what’s not up for debate? Whether what we have experienced in America over the last few years represents good monetary policy making. It doesn’t. Setting a public target, consistently missing that target, projecting that the target will be consistently missed in future, and conducting policy so as to make sure the target is in fact missed: that is lousy monetary policy making. And I cannot understand why the Fed does not see this record as detrimental to the recovery and highly corrosive of the Fed’s credibility.

In fact, this is actually an even bigger problem than Avent acknowledges. Think about it. We now have three major economies—the US, Japan, and Europe—which have persistently undershot their own inflation targets despite having enormous incentives to at least meet them as they try to recover from the Great Recession.

What does this mean? Everyone has assumed all along that if they were sufficiently motivated, central banks could always generate high inflation—and technically, that’s still as true as ever. If you control the printing presses, you can generate inflation. But what if it turns out that in practice it’s all but impossible for a modern central bank to meet even a modest inflation target during a severe economic downturn? How do we know whether this is due to lack of will; lack of technical firepower; or lack of political support? And how long does it take before markets decide it doesn’t much matter? After all, at some point there’s no practical difference between unwillingness and inability.

As Avent mentions, in the past it’s been mostly taken for granted that “credibility” for central banks was related to their ability to keep inflation low. Today, though, we have the opposite problem: central banks that are apparently unable to keep inflation high enough despite having tons of motivation to do so. And it’s not as if a 2 percent inflation target is especially challenging. No central bank should have a problem hitting that.

And yet, all three of the biggest central banks on the planet apparently are having trouble hitting even that modest target. Are they unwilling or unable? Either way, the longer this goes on, the more their credibility gets shredded. It’s a mystery why this isn’t an issue of bigger concern.