Over at Vox, Amanda Taub easily dismantles the argument that the NFL and Roger Goodell initially went easy on Ray Rice because they didn’t know the details of exactly what he had done. The arbitrator’s report makes it crystal clear that (a) they knew, and (b) they could 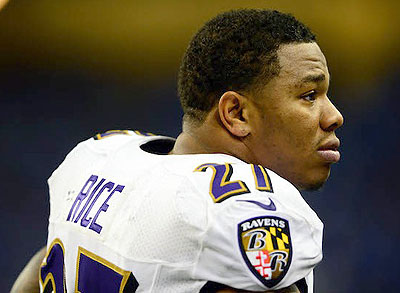 easily have viewed the damning elevator videotape if they’d had even the slightest interest in it. There was obviously something else at work:

The reason Rice wasn’t given a more severe punishment in the first place is that the NFL didn’t take the assault seriously enough….In the arbitration, the NFL claimed that Rice misled them by saying that he only “slapped” Palmer, and that she had “knocked herself out” on the railing, rather than that he had knocked her out. (The other witnesses to the disciplinary hearing deny that, and Rice claims that he not only used the word “hit,” he also demonstrated to the Commissioner how he had swung his fist across his body during the assault, making its force clear.)

But the fact that the NFL made that argument suggests that they still don’t understand domestic assault, or take it seriously enough. The idea that it is somehow morally superior to “slap” one’s girlfriend than to “hit” her is bizarre, particularly in a situation in which the alleged “slap” knocked the victim unconscious.

Yep. The NFL has since tightened its standard disciplinary action for domestic violence, but only time will tell if their attitude lasts—or, better yet, becomes even less tolerant.

Still, the stock liberal narrative that Rice was essentially let off with a slap on the wrist leaves me uneasy. What Ray Rice did was horrific, and it’s inevitable that any hesitations on this score will be taken as some kind of defense of his action. For the record, that’s not what I mean to do here. But I’m uneasy nonetheless and want to make two related points.

First, although Ray Rice’s assault of Janay Palmer was horrible, any sense of justice—no matter the crime—has to take into account both context and the relative severity of the offense. And Ray Rice is not, by miles, the worst kind of domestic offender. He did not use a weapon. He is not a serial abuser. He did not terrorize his fiancée (now wife). He did not threaten her if she reported what happened. He has no past record of violence of any kind. He has no past police record. He is, by all accounts, a genuinely caring person who works tirelessly on behalf of his community. He’s a guy who made one momentary mistake in a fit of anger, and he’s demonstrated honest remorse about what he did.

In other words, his case is far from being a failure of the criminal justice system. Press reports to the contrary, when Rice was admitted to a diversionary program instead of being tossed in jail, he wasn’t getting special treatment. He was, in fact, almost a poster child for the kind of person these programs were designed for. The only special treatment he got was having a good lawyer who could press his cause competently, and that’s treatment that every upper-income person in this country gets. The American criminal justice system is plainly light years from perfect (see Brown, Michael, and many other incidents in Ferguson and beyond), but it actually worked tolerably well in this case.

Second, Ray Rice committed a crime. We have a system for dealing with crimes: the criminal justice system. Employers are not good candidates to be extrajudicial arms for punishing criminal offenders, and I would be very, very careful about thinking that they should be.

Now, I’ll grant up front that the NFL is a special case. It operates on a far, far more public level than most employers. It’s a testosterone-filled institution, and stricter rules are often appropriate in environments like that. Kids take cues from what they see their favorite players doing. TV networks and sponsors understandably demand a higher level of good behavior than they do from most employers.

Nevertheless, do we really want employers—even the NFL—reacting in a panic to transient public outrage by essentially barring someone for life from ever practicing their craft? Should FedEx do that? Should IBM do that? Google? Mother Jones? Perhaps for the most serious offenses they should, and it’s certainly common to refuse to hire job candidates with felony records of any kind. (Though I’ll note that a good many liberals think this is a misguided and unfair policy.) But for what Ray Rice did?

I just don’t know about that. Generally speaking, I think we’re better off handling crimes through the criminal justice system, not through the capricious judgments of employers—most of whom don’t have unions to worry about and can fire employees at a whim. I might be overreacting, but that seems like it could become a dangerous precedent that hurts a lot more people than it helps.

I’m not unshakeable about about this, so please argue about it in comments—though I’d really prefer it if we could avoid ad hominem attacks that I just “don’t get” the scourge of domestic violence. I have precious little tolerance for domestic violence, and that generic accusation gets us nowhere anyway. My actual argument is this: (a) Rice is a one-time offender who made a momentary mistake, not someone who’s a serial abuser; (b) this is normally grounds for relative leniency; (c) Rice was treated reasonably by the criminal justice system; (d) that’s the appropriate place for handling crimes like this. We should not applaud workplaces being turned into arbitrary kangaroo courts simply because a case happens to get a lot of public attention. It’s a slippery slope that we might come to regret.

POSTSCRIPT: Looking for counterarguments? I’ll give you a few: